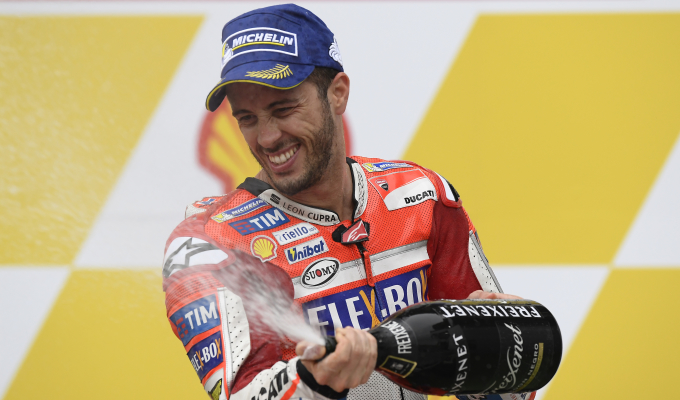 Andrea Dovizioso has described this past weekend as truly perfect as he claimed his fifth win of the season to keep his title chances alive.

Not slowed down by the rain, Dovizioso patiently moved past title rival Marc Marquez and then Johann Zarco, before a mistake by team-mate Jorge Lorenzo gave the Italian the lead, something he held onto until the very end.

“It was a truly perfect weekend,” he said. “We were quick in every session, both in the dry and in the wet, and today in the rain we dominated. Here at Sepang Jorge and I really had a bike advantage, because our Desmosedici was very fast, and we managed to administer the gap in the best possible way even though track conditions were very difficult because there wasn’t much grip.”

With Dovi’s win and Marquez only able to finish in fourth position, the gap between the two is 21 points heading into the final race of the season in Valencia. Despite the still unlikely event Dovizioso can turn the deficit around, he will go to Valencia confident of what he can achieve.

“I’m very pleased for the win which keeps my hopes alive for the title, and even though I know it will be very difficult at Valencia because it’s a track where Marquez always goes well, we’ll be going to Spain with confidence to try and bring home the victory.”