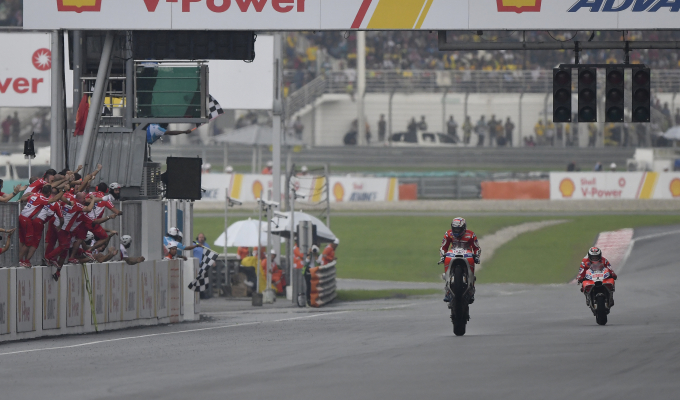 Andrea Dovizioso produced another stunningly mature performance to claim his sixth win of the season and keep his MotoGP title chances alive, reducing the gap to 21 points with Marc Marquez only able to finish fourth.

A heavy rain shower before the start of proceedings at the Sepang International Circuit added some spice to proceedings and shook the early stages of the Grand Prix up. Johann Zarco took an early lead before the Ducati duo of Jorge Lorenzo and Andrea Dovizioso slowly pulled away at the front.

Marquez found himself in fourth for the majority of the race and despite momentarily closing in on Zarco, the World Champion never had the pace to truly close down the Frenchman.

Behind the front four Dani Pedrosa was fifth and was just ahead of Danilo Petrucci who sliced his way through the field after a technical issue forced him to start from the back of the field.

It was a day to forget for the factory Yamaha’s with Valentino Rossi the top factory bike in seventh position and Maverick Viñales ninth, sandwiching Jack Miller, whilst Pol Espargaro rounded out the top ten as the KTM continues to improve every weekend.

With these results this weekend, going into the final weekend of the season, Marquez requires just five points to win the World Championship in Valencia.