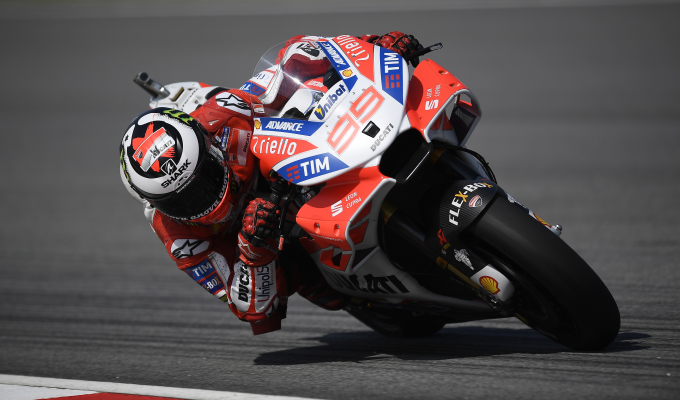 Jorge Lorenzo said that team-mate Andrea Dovizioso deserves to fight for the Championship right down to the last race of the season, whilst admitting he wouldn’t have been able to stay with Dovi had he wanted to.

The Spaniard has had an indifferent season since moving from Yamaha last winter and looked at half race distance if he could be set to claim his first win of the season with Ducati as he had a large gap over Dovizioso.

However, as the race went on, Lorenzo was eventually caught and passed by his team-mate when he suffered a big moment on the front end of his Desmosedici at turn 15. Once Dovizioso had passed him, the Spaniard admitted that the condition of his front tyre prevented him for being able to challenge the Italian had he wanted his first win.

“It was a great race that showed the progress we made throughout the weekend,” said the three-time MotoGP World Champion.

“I was really at ease on the bike, and even though I’d have preferred a dry race, when I saw it was raining I changed my mentality and tried to keep focused, in order to avoid a mistake like Misano.

“I pushed hard but in the last few laps I was in a bit of crisis with the tyres, especially the front, and had a few scary moments in some corners. It wasn’t the right time to do anything stupid and when I almost crashed at Turn 15 and Andrea passed me I realized that I wasn’t going to be able to fight for the win.

“I know exactly how important a world title is for Ducati, Dovizioso has had a fantastic season and deserves to fight for the championship right down to the last race. In this weekend Andrea has always been faster and I’m pleased for the team for this first 1-2 win of the season, because it means we’re working really well.”