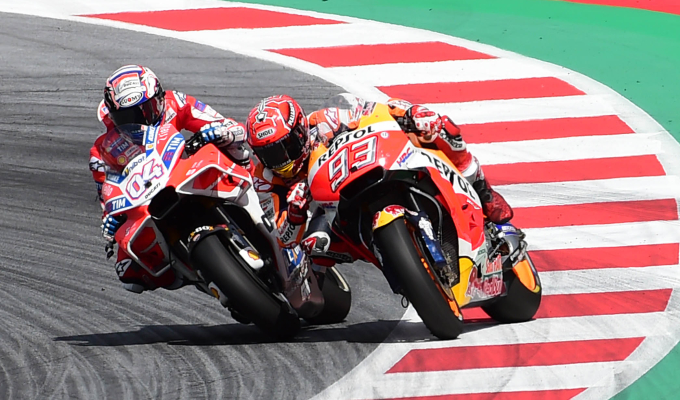 Andrea Dovizioso said he knew that Marc Marquez was going to make a lunge into the last corner of the Austrian Grand Prix.

The Italian claimed his third win of the season in Austria to keep in touch with Marquez at the top of the MotoGP World Championship. Dovizioso’s win saw him hold off Marquez for the second half of the race with multiple passes and close calls over a sensational race.

Marquez took the lead from Dovizioso no fewer than four times over the race, only to relinquish it straight back to Dovi with the low end torque of the Desmosedici and softer tyre Dovi elected for, preventing Marquez from ever truly escaping.

The final few laps saw the race come down to the final corner with Marquez trailing. A last corner lunge from Marquez nearly saw the pair end up on the floor, but Dovizioso knew what was coming and was aware enough to avoid the contact and focus on his drag to the line.

“It was a crazy race, but to be honest the whole weekend was incredible, and in particular the final curve of the last lap, but I managed to remain clear headed and was aware that Marquez was going to try and pass me,” said the Italian.

“It was a very difficult situation because if Marc had closed the door coming out of the corner, he would have forced me out and passed me.

“Instead I was able to resist his attack and I went on to win! I’m very satisfied with the way we managed the entire weekend with my team: understanding the right choice of tyres was really difficult but we did it.

“We had a great race, we’re making up points in the championship, and we’ve got all the right cards to fight for the title.”