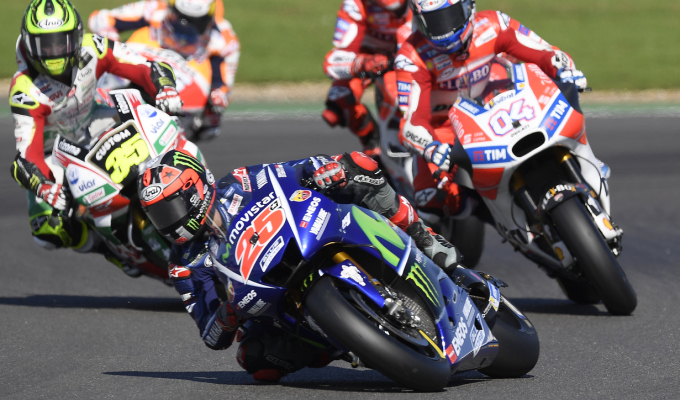 Heading into Sunday’s 20 lap Grand Prix, the consensus pick between the two tyres was that of the harder Michelin tyre. All of the front three rows elected to use the hard tyre other than Viñales. Despite going against the grain, the decision proved vindicated for the Spaniard who posted his fastest lap of the race on the final lap.

“The decision to use the soft was not a gamble,” said Viñales. “We were working really well with the soft all weekend trying to make the tyre life longer.

“Honestly, I felt great on the bike. From the first lap I was just trying to save tyres until the end and it was quite hard when Dovi and Marc overtook me because I know my strongest point was at the end and the last ten laps. So that’s what I did I just tried to save tyres and push at one hundred percent for the last five laps.

“It was quite scary when Marc’s engine broke because I didn’t know if it was oil or water so I lost a lot compared to Valentino and Dovizioso in the breaking point and they got away a little bit. But we were able to catch them and try to fight for the victory. But I’m really happy that in the last lap I felt strong as always and the bike was working well so I am happy with that.”

Somewhat surprisingly, Viñales soft tyres improved as the race went on, where Rossi’s hard tyres dropped with three laps to go. Viñales said that he can use the softer tyre because of his riding style and the work he put in on it over the weekend.

“We have different riding styles, different ways we enter the corner. During this weekend I was feeling really great with the soft even when it was worse to use it, I was feeling very strong and with the team we discussed so much about the tyre choice but the soft was really good for me. In the final part of the race we were really strong,” said the Spaniard.

“Soft tyres seem to work with my riding style as in the beginning of the season and we need to bare this in mind to be strong in the next ones.”

Viñales now finds himself just 13 points behind series leader Dovizioso despite not winning since Le Mans. With six races to go, Viñales is firmly in the mix, thanks in no small part to Marquez’ engine blowing up, quite literally in his face.

“Six races is a lot of points. We’re really close especially in the championship over the first five riders. So we have to try and work really hard this weekend and as I said trying to try and improve the bike. After the summer break it looks like we’re struggling even more but now we’re coming and I know when our bike works we can be very strong and it’s what we have to do. Now with six races to go, we need to come back stronger and try and challenge in every race.”

“I saw the explosion in my face,” said Viñales. “Honestly I was quite scared as I didn’t know if it was oil or water, so I just broke 30 meters earlier than where I had been breaking so I lost quite a lot compared to Valentino and Dovi. But I was happy that it was only water or that the oil didn’t touch the wheels because otherwise it would’ve been a big disaster.”

Both Viñales and Rossi were testing in Misano earlier this week. Whilst there both riders worked on a few aspects of the bike – including the 2018 chassis which some believe was used today. Viñales said that they worked hard on the electronics in Italy and that helped today.

“In Misano we concentrated a lot on the electronics. It was one part we needed to use a lot. We suffered in Austria, so we were looking forward to improve a lot in Misano in the hot temperatures and we did,” he said.

“We didn’t try too much like changing the balance in the bike or modify so much. We have already modified a lot and we didn’t find any advantage, so we just tried to improve the electronics and the consistency of the tyre. I think we did it this weekend and was really good to ride fast again so we have to continue like that, and maybe it’s another step like from Misano.

“We improved a lot in the test in Misano, especially in the electronics, but we still have to improve because the competitors are really good, especially in the hot conditions. So we still we have a lot of work to do, but we’re getting closer every race.”

With five riders fighting for the majority of the race, Viñales said that it was a demanding but fun race, without getting distracted or worrying about the championship.

“This race was really tough as it was five riders doing the same lap times until the end so it was very tough to be strong and consistent, because it’s a demanding track. But honestly it’s was good,” he said.

“It was a pity that I lost so much when Marc broke the engine but I’m really happy anyway. We come back stronger again and I know in Misano we did a good job and we can recover the points difference.

“I didn’t feel the pressure from the championship. I just tried to relax and enjoy the race and the battle. It was nice to do really good lap times over the race and pushing at the end going for the victory, so it was really good the race. And I enjoyed it so much, especially the last laps.”