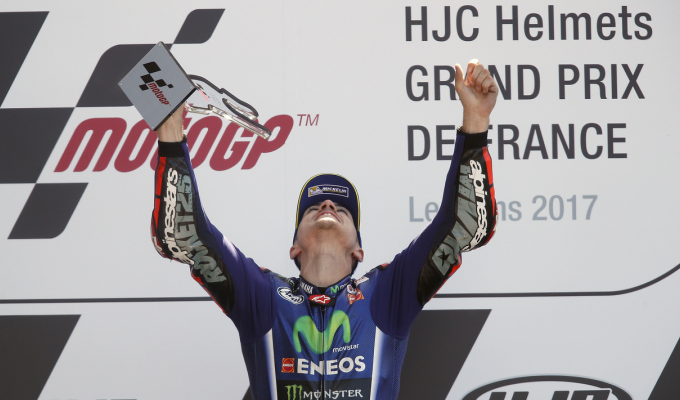 The Spaniard was the beneficiary of two mistakes on the final lap of the race from Valentino Rossi to claim his third win of the 2017 season and to take the lead of the World Championship back from the Italian.

It wasn’t just his team-mate who Viñales was struggling with. Hometown hero Johann Zarco took the early lead and his combination of soft front and rear Michelin looked like a good decision as he comfortably held the two factory Yamaha’s off. Viñales admitted to finding it tough keeping up with Zarco in the early stages of the race with a full tank, however, once Viñales took the lead from the Frenchman on the seventh lap of 28, his medium front and rear tyre choice were coming into their own and helped him edge away from Zarco.

Viñales said the biggest area he was losing out to Zarco was on corner exit with the drive from the satellite Yamaha helping Zarco get out of the corner much smoother than he was.

“Keeping up with Johann in the early laps of the race was hard, he was really fast and with the full tank we were not so strong as him,” said the 22-year-old.

“He was exiting from the corners really good and really fast. Then his tyre started to drop a little bit and our tyre started to work good on the rear, and lap by lap I was feeling better.”

Viñales retook the lead from Rossi halfway around the lap and despite waiting for a last gasp attack him his team-mate, Viñales said that he was so happy to have secured the fourth win of his MotoGP career.

“Until the end, in the last lap, I gave everything I had here in the French GP and, honestly, I’m so happy and so pleased,” he said.

“The team was working on an incredible level this weekend, I hope we can continue like that. For sure the tyres were working really good here, we hope we can work like this also in Mugello.”