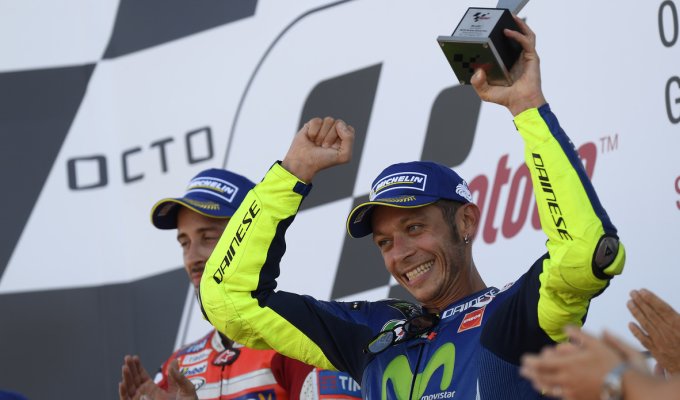 Valentino Rossi dampened down expectations, saying he is not strong enough in the final laps to fight for the championship, despite the lifeline after Marc Marquez’s engine blew up during today’s British Grand Prix.

The Doctor celebrated his 300th premier class Grand Prix with a third place finish. After leading for 17 of the 20 laps, Rossi’s rear tyre didn’t have enough left in it to allow him to fight for the victory. A reoccurring theme and something which Rossi ultimately beleives will cost him a shot at a historic tenth World Championship.

“I’m happy because for me it was a very good race after a good weekend, I did a good start and was able to ride well and give the maximum for all the race. I enjoyed it a lot because I had good pace so I could stay at the front and I can ride the bike in a good way,” said the Italian.

“We were worried because we suffer a bit in the last laps, but with five to go I thought I could do it. But unfortunately I slowed down a little bit in the last laps and I suffered a bit too much and Dovi and Maverick overtook me, and it was a bit frustrating because I wasn’t strong enough to fight to re-overtake them.

“But I’m happy because the podium was my target and it was a great race we all arrived close and I think the we still have to work on the last laps, but this weekend we’ve improved and understood something important to work so we can be strong in the last part of the race before the end of the championship.”

“26 points behind now and in six races that not a lot but for me it’s difficult because I’m not strong enough in the last laps to fight for the championship. I am not far but I am in fourth, so it’s difficult.”

Both Yamaha riders were in action on Monday, testing in Misano. Whilst there both riders worked on a few aspects of the bike – including the 2018 chassis which some believe was used today. Rossi said that the work put in on Monday paid dividends today and helped him secure the podium.

“We worked on the electronics and acceleration and tried to save a bit with the tyre. It was nothing big, but worked on the setting. It’s very similar to Austria, the problem is this year is like this,” he said.

“Sometimes you arrive and the bike is impossible to ride you can do everything but you always suffer. And sometimes at other tracks, like here or Brno, we arrive at the track and the bike is good and the tyre works very well and for this reason we need be ready for all situations and conditions as it’s always a surprise.”

Rossi’s team mate Maverick Viñales was the only one of the front riders to use the softer compound rear Michelin. Viñales produced his best lap of the race on his final lap, something that you wouldn’t expect from a softer tyre. Rossi said that the three compounds of tyre aren’t too dissimilar and that it is more an option based on the riders variables rather than the conventional soft or hard.

“For me, from what I understand during this race and weekend is that the three tyres different, the three options for the rear are not very different and it depends on rider to rider. On things like their weight, their length and the way you ride. It’s impossible to know (if he would’ve won on the soft) but for me it would’ve been more difficult,” said Rossi.

“It’s very strange that the soft was faster in the end. The three rear options are not so different. It depends more on the bike and the riding style. Sometimes it will happen with the Pirelli. Sometimes the Pirelli when it’s hot it’s better to use the soft, like today or in Austria. But when it’s cold it’s better to use the hard, so it’s the opposite. But we don’t know why.”

Whilst playing down his own chances of securing the title this season, Rossi said that this years battle – with the top four covered by just 26 points – is especially unique and that while he will always give his maximum, he remains realistic.

“I think it’s something special because usually you fight with another one or maximum three riders, but this year it’s five. Also doing the practice, you can be out of the top ten very easily.

“I’m very realistic, always. I’m happy to stay there and everything is open, I’ll give my maximum but I’m not strong enough at the end of the race to try for the championship, I am not so far, but I am in fourth place. So I need it’s difficult, but we need to try improve this problem, and I hope as soon as possible.”

Rossi said whilst important to know when Marquez was out, or when any title rival goes out, it didn’t change anything for him, as he was giving the maximum for the win regardless.

“I saw Marquez out and I think it’s important to know during a Championship like this, but it didn’t change anything for me because I wanted to win and win to the maximum because when you’re there, it’s not one race to go, it’s six to go and you have to give your maximum anyway.”

With track temperatures, reaching upwards of 40 celsius during todays race, Rossi couldn’t help but have a small poke at the English weather.

“I think what’s more important is  the weekend and how you’ve felt on the bike since Friday. I’ve felt good with the bike from Friday, so I can enjoy when I ride and I was quite relaxed before the race. I also think we need to enjoy these conditions because it’s a big surprise to ride Silverstone in MotoGP with these temperatures and no wind, completely dry is great fun,” said Rossi.