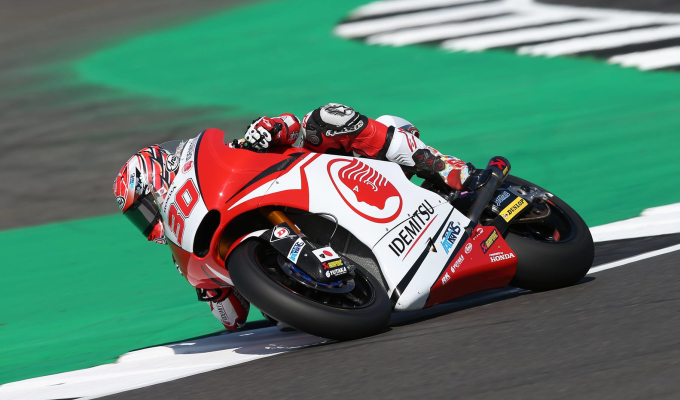 Taka Nakagami produced a perfect ride to claim the second win of his Moto2 career under the sunny skies of Silverstone from Mattia Pasini and Franco Morbidelli.

The Japanese rider bridged a gap to the Marc VDS duo of Alex Marquez and Morbidelli before waisting no time in passing the championship leader and pulling a big enough lead to hold onto the win.

Marquez got a lightning quick start from the middle of the front row and was the early pace setter, Marquez and Morbidelli were lapping on lap record pace before settling in with the duo sat around three seconds ahead of Nakagami. After some brief changing of positions, Marquez lost the front end of his Marc VDS machine and crashed out of the lead. Marquez was able to rejoin and eventually salvaged a fourteenth position.

At the front Morbidelli wasn’t on his own long as Nakagami arrived quickly and passed the Italian without much of a fight from Morbidelli. In the closing stages of the race, Pasini caught and passed Morbidelli but he didn’t have enough time to catch Nakagami and had to settle for second position.

Tom Lüthi was fourth and saw the gap between him and Morbidelli extend a further three points at the top of the World Championship to 29 points.