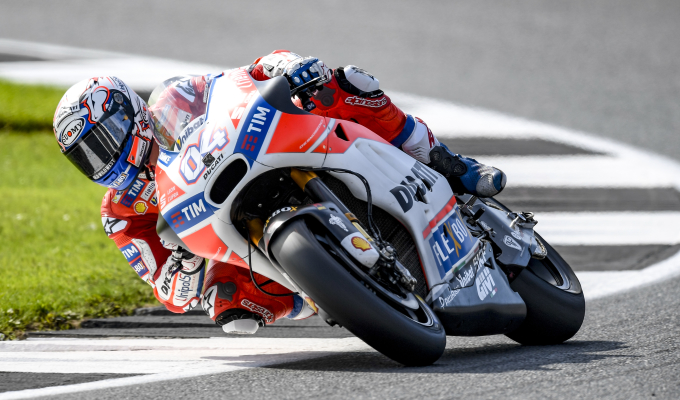 Andrea Dovizioso took the lead in the MotoGP World Championship after winning his fourth MotoGP of the season, coupled with Marc Marquez’ Honda RC213V breaking down.

The Italian had to wait until the seventeenth lap to take the lead from Rossi, who had taken the lead off the line and didn’t relinquish it until Dovizioso passed him into Stowe. Once Dovizioso took the lead, he never lost it, going on to take the win, beating Maverick Viñales by just 0.114 seconds. Dovizioso now has a nine point lead in the World Championship after Marquez’ bike broke down.

The Spaniard was in third position, behind Dovizioso, when his engine blew up at the end of the hanger straight going into Stowe. Once his engine went, it was over for Marquez and he will now be playing catch up to Dovizioso, whilst having to look over his shoulder at Viñales who is now just four points behind him.

Valentino Rossi claimed his 190th podium in his 300th premier class race, but it was a story of what could’ve been for Rossi who led for 17 of the 20 laps, before Dovizioso passed him, half a lap later Viñales went past him and he had to settle for third.

Cal Crutchlow was a very close fourth, finishing just a second and half behind Dovizioso, but the Brit couldn’t mount a serious challenge to get on the podium so had to settle for fourth position. Jorge Lorenzo was fifth and had a steady, unspectacular race but will be happy with the progress he continues to make on the Ducati, whilst Johann Zarco was sixth.

It was a case of damage limitation for Dani Pedrosa who was a lonely seventh whilst Scott Redding. Alex Rins and Alvaro Bautista rounded out the top ten. Pol Espargaro was eleventh but suffered a strange and scary highside after the chequered flag whilst Tito Rabat, Karel Abraham, Hector Barbera and Loris Baz rounded out the point scorers. Jack Miller was 16th with Bradley Smith the last of the finishers.

All eyes will be on Dovizioso heading to Misano to see if he is capable of not only keeping hold of his lead in the World Championship, but building on it in front of his home crowd.