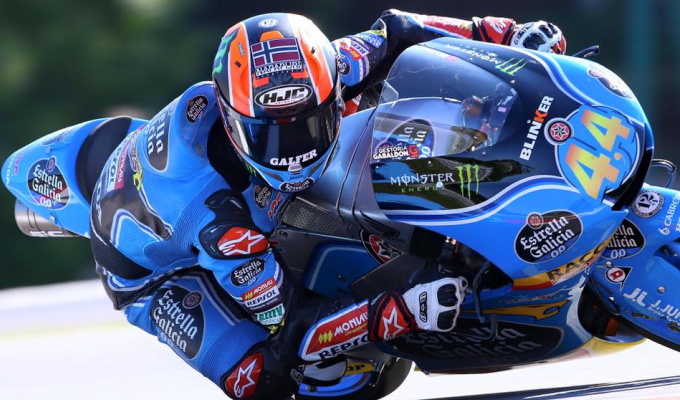 Aron Canet kept his title chances alive after winning a typically frantic Moto3 race, despite the race needing to be cut short one lap due to a red flag.

The Spaniard was the beneficiary of leading over the line after 15 of the 17 laps were completed when the race was cut short to a horrible looking crash at the end of the sixteenth lap involving Juanfran Guevara and Bo Bendsneyder.

In a lead group of the best part of 20 for the majority of the race, the front runners were at one point up to five abreast going into corners and only with immense skill managing to come out the other end unscathed.

With the race shaping up to be another Moto3 classic, the race was red flagged with the riders just coming onto the hanger straight. With the race stopped, Juanfran Guevara’s team mate, Gabi Rodrigo was leading, but once the laps were counted back, it was Canet who claimed victory just 0.063 seconds ahead of his team-mate Enea Bastianini and Jorge Martin who was a further 0.048 seconds behind.

Championship leader Joan Mir could only manage fifth position with his typical late charge ended by the red flag.

Multiple riders including home rider John McPhee and Mir were extremely unhappy when they saw the red flags, suggesting they believed that they had something left in the tank for a last lap challenge.