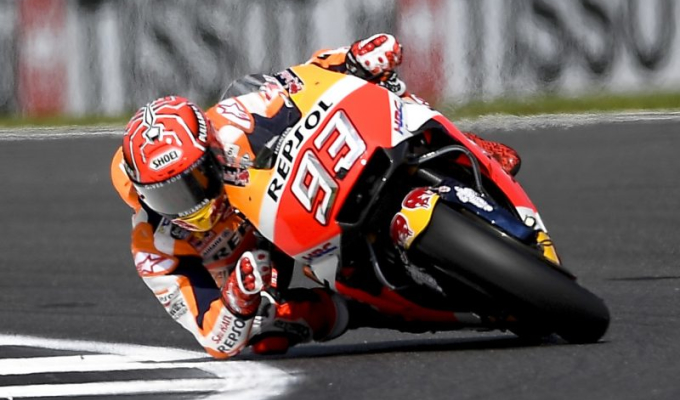 Marc Marquez was quick to come to the defence of his Repsol Honda team, insisting that what happened this afternoon, “is just part of racing”.

The World Champion was sat in third position, looking extremely strong when with seven laps to go, his Honda engine blew up, forcing him to retire heading into Stowe. With Honda engine’s hardly ever not lasting the distance, it was extremely rare to see Marquez’s go, especially as the engine used was a fresh one and one that he had been using all weekend.

“We were really unlucky today,” Marquez said after the race.

“I felt really good on the bike and in the race I was trying to manage my times and to wait a little bit for the last laps to attack. But you know, this is the first time that I’ve had this problem with Honda and it’s just unlucky that it was the race. But you know, in the end it’s part of racing.

“I have been using this engine all weekend. They’ve analysed everything, all my team and many Japanese people analyse everything. It was all working perfectly, even in the race, the power was there and then something happened.”

“Suddenly when I arrived at the end of the straight it just broke. It was some mechanical part inside the engine. So now we need to know what happened for the future, because it was a fresh engine. Anyway, I believe that they will understand quick and improve for the future.”

Eager to try and find the positives Marquez said that he felt that he and his team had the right mentality and that they were just unlucky today.

“I think of the positives and we were there one more time fighting for the victory, fighting against Yamaha and Ducati, but we need to keep the same way, the same level and the same mentality because I think it was the correct one.”

Marquez said that before his bike exploded on him, he knew that he had to follow Dovizioso, knowing that the Italian was “the guy”.

“I was trying to control the race in the way to save the front tyre. The temperature was much higher than in practice so for me the rear tyre, I felt was good, but I was just trying to manage the front tyre which is our biggest problem when the temperature is too high. And despite this, I was able to be behind Viñales comfortably,” he said.

“I could see that Valentino was there but wasn’t pulling away, he was just a second ahead so inside the limit. And then when Dovi overtook me, I started to realise that Dovi was the guy, because he was riding really good and the Ducati is working well in every circuit and Dovi is riding so good.

With today’s DNF and Dovizioso’s win, Marquez now finds himself nine points behind the Italian with just six rounds remaining. Marquez said that as soon as his bike blew up, he was thinking about the championship.

“I pulled the clutch immediately because it felt like the rear wheel was locking and then at 300kmph I didn’t want to fly! But no, honestly I was not thinking about what was happening, the bike just turned off,” he said.

“I was thinking about the championship and the small advantage that we had before the race. Of course for that we don’t like to lose that small advantage in this way but it’s part of racing and can happen. One more time, the most important thing is that we were fighting for the victory.

“Before the race, Dovi was already one of the favourites, one of the main opponents. Now he is leading, and he’s already won four races, so he’s the rider with the most victories. So I need to try control Dovi, try to control Viñales. The top five riders, even Dani, are inside the fight for the title.”