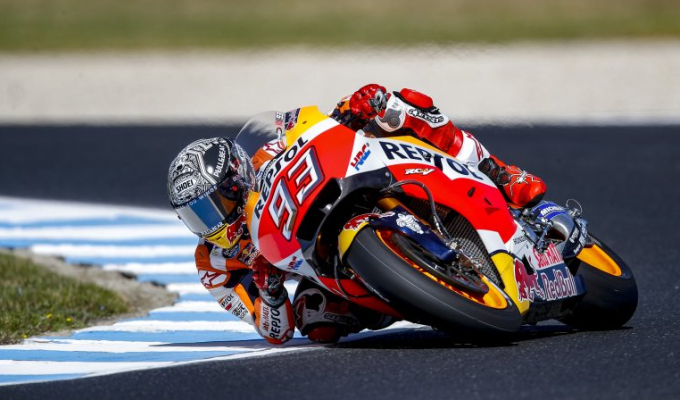 Marc Marquez laid down an early 2017 marker, topping the timing sheets during the first day of the second official test in Phillip Island.

The 2016 MotoGP World Champion wasted little time in moving towards the head of the timing sheets, whilst working on new developments throughout the day. A new engine inside the RC213V meant Marquez and his Repsol Honda team had a lot of work to do through the day as he looks to defend his recently reclaimed title.

Marquez completed 68 laps over the day, recording his best time of a 1:29.497 on his 53rd lap, which was good enough to leave him just under two tenths ahead of second placed Valentino Rossi and Andrea Iannone.

The Spaniard said he was happy with his busy days work, pointing to the period of adjustment that was needed moving over to a new engine from the last time he was in Australia.

“We had a quite a busy day because we worked a lot on the engine, which of course is different from the one we used here at Phillip Island last year,” said Marquez.

“That meant we had to readjust everything during the morning and spend a lot of time in the box.”

Whilst happy with the new engine, the 23-year-old noted that the electronics on his Honda could be an area in which he and his team can improve, although stressing that they’re currently in a very good place.

“In the afternoon we found a base for the electronics, but we still need to work harder in this area,” he said.

“I’m fast, but like in Malaysia we want to double-check how it’s working in some areas. We also worked on the setup, and overall it has been a positive day. The weather was good, which is always important, so hopefully it will stay the same for the next two days.”