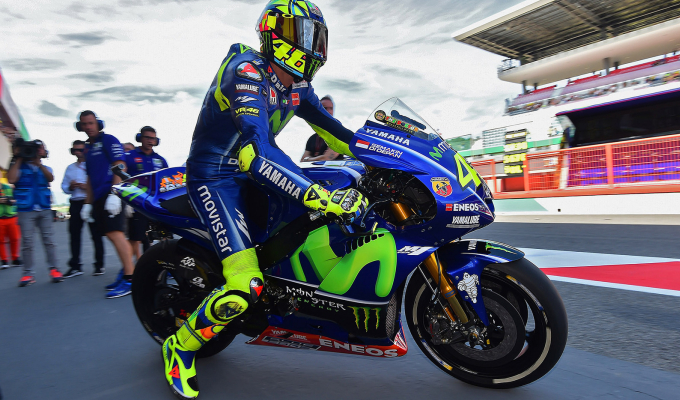 The Doctor – who was in hospital last week – struggled through the first day and in the early stages of the session appeared to be suffered from the same fate, until with just over a minute remaining in the session, the nine times World Champion put in a 1:46.543, hammering the competition.

Rossi’s M1 worked very well with the soft tyre compounds, whether they will hold up for tomorrow over race distance remains to be seen, with this afternoon’s FP4 session looking to crucial to find tyres for tomorrows race.

Behind Rossi, Marquez was second fastest on medium compound tyres and he was just ahead of Jorge Lorenzo who looks set to mount a serious challenge for pole position this afternoon.

Alvaro Bautista was fourth fastest and top independent rider, and he was followed by two more Spaniard’s in the shame of World Championship series leader Maverick Viñales and Tito Rabat.

Michele Pirro was seventh fastest and ahead of full time rider Andrea Dovizioso who seemed to fall slightly off the pace after an extremely impressive first day in Tuscany. Dani Pedrosa fought his way past traffic to finish eighth whilst Aleix Espargaro rounded out the top ten.

Friday pace-setter Cal Crutchlow leads the list of impressive names that will be battling it out in Q1 including Johann Zarco, Jonas Folger and Andrea Iannone.