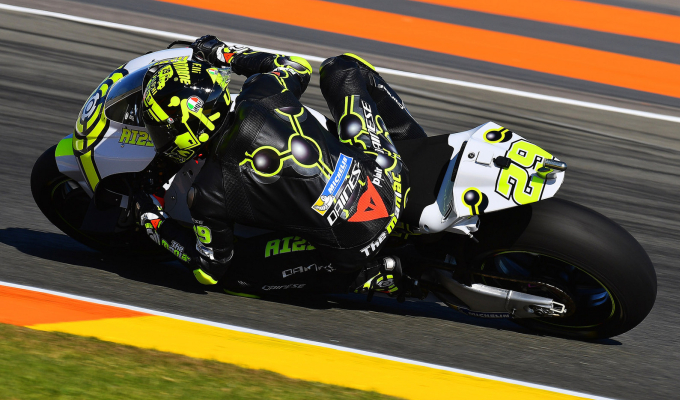 Factory Suzuki rider Andrea Iannone has said that he doesn’t know anything about his new GSX-RR, and he wants to keep it that way until he arrives in Malaysia.

The Italian moves to Suzuki after four years with Ducati, and he will have a totally new bike to learn. Where his Suzuki predecessor Maverick Viñales is benefitting of moving between two very similar bikes, as he moves to Yamaha, Iannone isn’t afforded the same luxury coming from Ducati.

Despite moving onto a totally different bike, and having to change his riding style, Iannone impressed during his first outing on the Suzuki during the post-race test in Valencia, where he ended the test fourth fastest overall, just over half a second off of the pace set by Viñales.

It was in Valencia where Iannone got his first taste of the GSX-RR, but hasn’t asked Suzuki for any more updates regarding the 2017 bike, insisting he is happy to go to Sepang later this month, without any expectations of what to expect from his new bike.

“I haven’t seen, nor do I want to know about the new bike, it’s better that way,” ‘the Maniac’ told Italian publication Tuttosport.

“I just want to go to Malaysia and try it. I’ve always gone without expectations, that way you can’t be disappointed.”

Since being dumped by Ducati in favour of Dovizioso, the 27-year-old insists he has grown up. A spate of rash decisions last season saw Ducati elect to keep Dovizioso over Iannone, and Iannone says that not only is he far more mature than he was last year, but that he’s also much happier with where he is, both professionally and personally.

“I have everything I want,” he said. “At 27 years of age, I couldn’t ask for anything more in my life. I’ve matured a lot. I have the best people around people and a great atmosphere that will help me turn the page after four years at Ducati.”

He continued, “I’ve changed, I’ve grown and I’ve matured like everybody does. I feel I have a more sensible head on my shoulders, managing every situation better. Before was just instinct, an overreaction.

“For me, everything is white or black, guess you could say I’m colourblind,” he joked.

Whilst not saying exactly what his goal is or expectations are for 2017, Iannone did say that he wants to be a star in MotoGP and to fight for a World Championship consistently, whilst noting that achieving that is far from easy.

“I want to be a star, that’s what I’ll try for. I came into MotoGP to fight for the World Championship. It’s what I try and achieve, but obviously it isn’t easy,” he said.