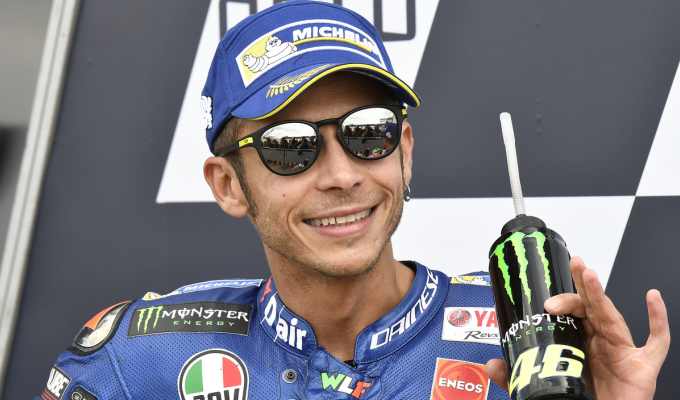 Valentino Rossi was so close to claiming a historic pole position on his 300th Grand Prix, before spinning issues in the final sector denied the Italian the chance of pole.

Marc Marquez produced the fastest ever two-wheeled lap around Silverstone in qualifying, the first ever 1:59. However, after Marquez had posted his lap, the Doctor was under the time of the World Champion. Unfortunately for Rossi, a problem that has plagued him all weekend struck, and that was the final sector. Rossi lost around four tenths to Marquez in the final sector, meaning he just missed out on pole position.

Despite missing out on posting the fastest lap at Silverstone himself, Rossi was pleasantly surprised to be so competitive, with his qualifying lap nearly a second under his best lap around the British circuit.

“We always suffer in Sector four because it’s a place where our problem is big and we spin a lot,” said the nine-time World Champion.

“But starting yesterday from a good level, today we tried to improve but unfortunately we weren’t able to make it better.

“The feeling with the bike and track is a bit worse today than yesterday, but we hope from today to tomorrow it remains dry. But it was a good lap and I enjoyed it, I improved my best lap at Silverstone by 0.8.”

Rossi said that tomorrow morning they will need to work on the expected tyre life with the M1 suffering problems with degradation far more than it has in previous years. Despite expecting a second half of the race, Rossi is aiming for podium number 190 in race number 300.

“Now we have to try and understand if we can improve, especially the tyre life, because as had happened a lot this year, at the beginning we’re not bad but we suffer with degradation,” he said. “I think the second half of the race will be difficult but I hope to make a small step to be there.

“300 is a great number and it’s important to try and get on the podium tomorrow in this race! If everything goes well I think we can fight for the podium – maybe the last spot?”