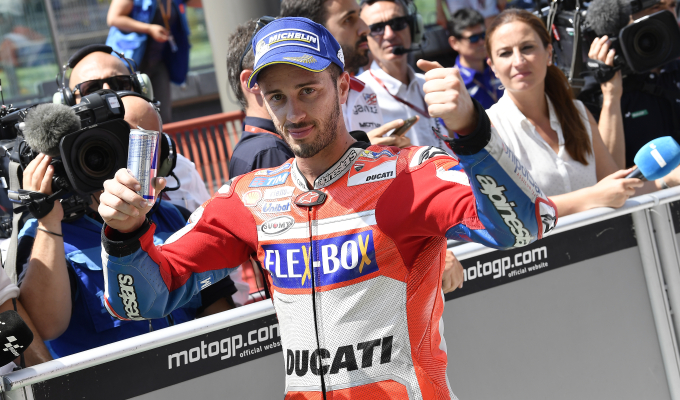 Andrea Dovizioso battled through food poisoning to claim his first win of 2017 and Ducati’s first around Mugello since 2009, joined on the podium by Maverick Viñales and Danilo Petrucci.

The Italian became the first Italian to win on a Ducati at Mugello and became the third Italian to claim victory around Mugello today.

Starting from the outside of the front row, the Italian fell behind his teammate in the early stages, however, once the race started to settle down, Lorenzo dropped down the field leaving a front four of Dovizioso, Pramac Ducati’s Petrucci and the Movistar Yamaha duo of Viñales and Valentino Rossi.

With eight laps to go, Dovizoso went past Viñales to take the lead of the race, with question marks over his ability to fight until the end, Dovizioso started putting time into the Yamaha. With Dovizioso making his way to the front, Petrucci moved past Rossi into third and wasted little time in moving past the second M1 into second place.

Despite moving up to second, Petrucci didn’t have the pace to ever truly catch Dovi, and with three laps to go, Viñales moved back past the Italian into second, but nobody was touching Dovizioso who claimed his third win of his MotoGP career.

“A lot of emotion during the race. Before, my energy wasn’t so good. We had a bit support from Ducati and the fans. The team worked very well. I really wanted this victory. It’s a dream come true,” said Dovizioso in Parc Ferme after the race.

Behind the front four, Alvaro Bautista produced a stunning ride to hold off reigning World Champion Marc Marquez who could only finish in sixth position. Johann Zarco was seventh continuing his rookie campaign just ahead of Jorge Lorenzo who will’ve been expecting more from his first Italian Grand Prix as a Ducati rider.

Both Espargaro brothers were forced to retire, whilst Cal Crutchlow was taken out accidentally by Dani Pedrosa in the final lap of the race.

With more chaos behind him, Maverick Viñales extended his World Championship lead to 26 points ahead of newly second placed Dovizioso. Rossi lies four further points behind his compatriot, who his himself seven points ahead of the Repsol Honda duo who are both on 68 points.