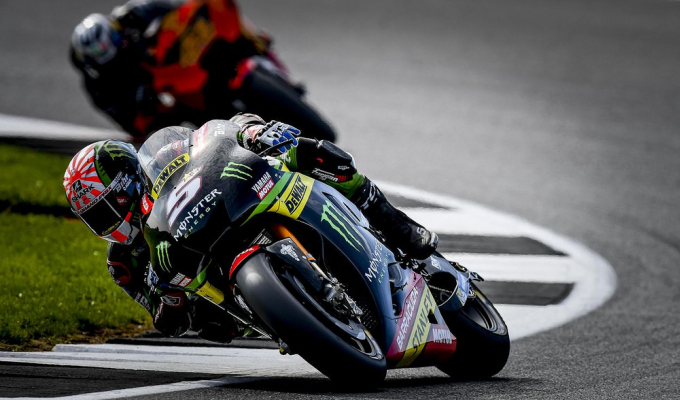 Johann Zarco was the fastest man at a cold and slight damp Silverstone this morning leading MotoGP free-practice three, although it was Cal Crutchlow’s lap time from yesterday that sees him lead all riders and heading straight into Q2 this afternoon.

Overnight rain meant the track was still damp in parts, and despite the rain stopping before the MotoGP session, a lot of riders didn’t stick slick tyres on until late in the session. Zarco was one of just three riders who improved his time in FP3, catapulting himself into eighth and pushing Andrea Iannone down to eleventh and subsequently into Q1.

Cal Crutchlow’s blistering lap time from yesterday afternoon was the fastest over the combined three free practice sessions and he will head a strong group filled with the usual suspects directly into Q2, minus Dani Pedrosa.

The Spaniard has been struggling over the bumps on the first day at Silverstone and he will be hoping to navigate his way successfully though Q1 and secure a competitive spot for tomorrow’s race.