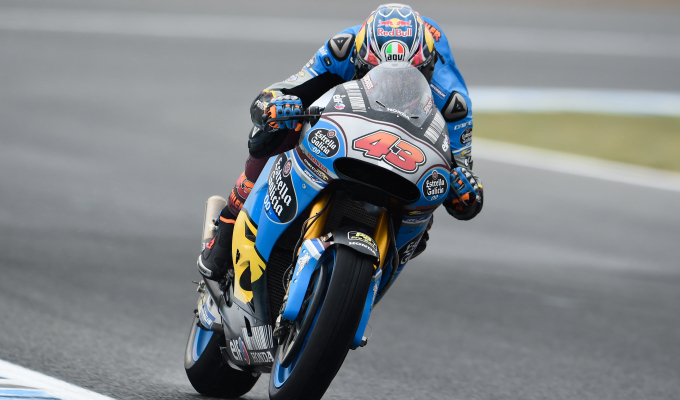 Aussie Jack Miller topped the first day of free practice in Le Mans after a blistering set of laps on slick tyres at the end of FP1.

The Estrella Galicia rider ended the first session of the day 1.288 seconds as the track dried slowly after a cold morning and overnight rain. Miller was the first man on the slick tyres with fifteen minutes to go and at one point had a lead of over three seconds to second position before the World Champion stuck some slick tyres on and reduced the gap to something more respectable.

Hometown hero Johann Zarco gave the French fans something to cheer about as he was third fastest and just ahead of Cal Crutchlow and fellow Frenchman Loris Baz who was also one of the first riders onto slick tyres.

A downpour after Moto2 FP1 meant the afternoon was sodden and no times were improved. With rain falling all the way through the 45 minute session, most riders decided to use the conditions to try and improve their lap times.

Italian Andrea Dovizioso on his factory GP17 the fastest rider of the afternoon from Marc Marquez and Danilo Petrucci, however, the forecast for the rest of the weekend is for considerably better conditions meaning this session should be largely redundant.

With the afternoon so wet, nobody was able to improve their combined morning lap times, meaning the likes of Jorge Lorenzo, Dani Pedrosa, Andrea Iannone and Jonas Folger, will have to improve their laptimes during FP3 tomorrow morning or face the added complication of Q1 to try and get into the pole position shoot out.