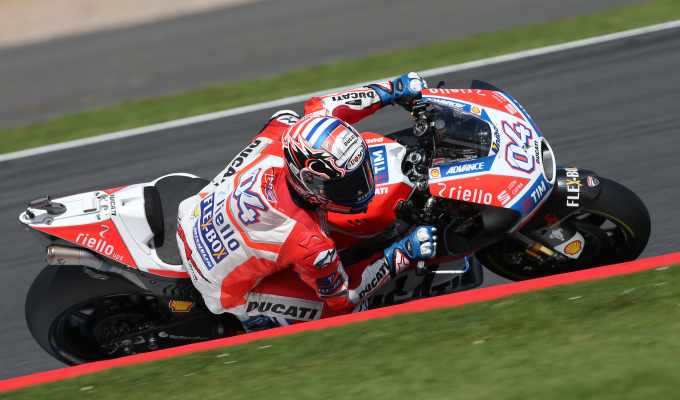 Andrea Dovizioso has said that the fast corners are giving him and his Ducati difficulties as the championship challenger could only manage to qualify in sixth position.

The Italian arrived in Silverstone fresh off his win in Austria, keeping himself firmly in the championship chase. After a steady day on Friday, Dovi was looking for more over qualifying. Dovi will start tomorrow’s 20-lap British Grand Prix from the outside of the second row after qualifying just over six tenths off of Marquez’ record breaking lap.

Silverstone is the longest circuit on the calendar with a combination of straights and both fast and slow corners. Dovizioso beleives that his Desmosedici is very good on acceleration and breaking, but thinks he loses out over quick changes of direction.

“It’s difficult for us to say whether it’s worse over the bumps. I think we’re quite competitive,” said the 31-year-old.

“I think our bike is really, really good on acceleration and breaking, but our turning speed we need to improve. The bike is quite heavy so in some parts we loose too much. That’s why I think we’ve struggled over these two days. But in the end, our lap time is very close to the leaders.”

Dovizioso won last time out on the softer Michelin tyre, something many didn’t think would be possible. Dovizioso said that he hasn’t decided what tyre he will use tomorrow, but said that the current free-practice format coupled with the three compounds of tyres available to all riders mean there is always a bit of a gamble when picking a race tyre.

“I’ve not decided what tyre I’ll use. It’s difficult with three tyres. Yesterday, when we compared the soft, medium and hard, the hard didn’t work but we knew there was a problem with the actual tyre,” he said.

“In the first free practice, we need to make a laptime, so we have to spend some time with the soft tyre to have a good lap in practice. The amount of laps you put into each tyre, is less than half race distance, especially in this track as it’s very long. It’s almost impossible to know the right choice of tyres.”