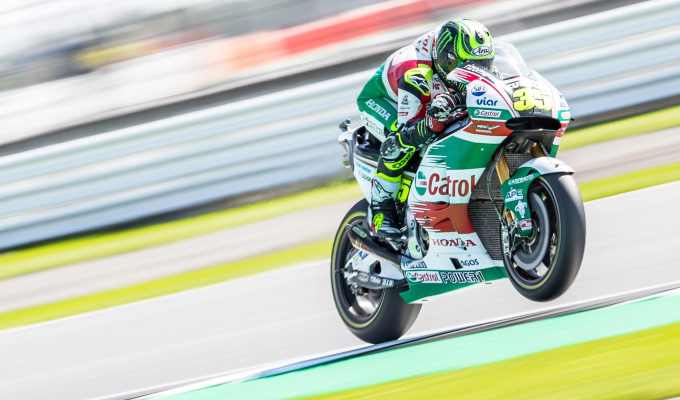 Cal Crutchlow has said it’s win it or bust tomorrow, insisting he has nothing to lose ahead of tomorrows British Grand Prix at Silverstone.

Crutchlow, who topped Friday’s free practice sessions, will start tomorrows race from the outside of the front row after a small mistake in qualifying. Crutchlow said that he feels good on the bike, in spite of not feeling quite as good today as he did yesterday, through one reason or another.

“Honestly, I feel good on the bike,” said the Brit. “We haven’t done many things over the weekend. I didn’t feel great today. I didn’t sleep too well last night for some reason. I don’t know why, I always sleep well but I didn’t sleep. It’s funny as I was fast asleep then woke up and couldn’t get back to sleep until 3am. I have no idea why!

“I also had no grip today, compared to yesterday. I think the rain washed our grip away. Marc’s always a little better than most of the Honda riders when there’s no grip.

“Then this afternoon I started to feel good and do a good pace but I made the mistake myself, I could’ve been on pole today.

“I don’t know if I will win tomorrow, but I’ll tell you one thing; it’s win or bust. What have I got to lose?”

Crutchlow said he could’ve been on pole, but he said he made a self inflicted mistake which cost him his shot at a sub two-minute lap of his own.

“I out-rode myself. I just went really long into turn 13, and from there I lost three tenths, and in the end I was one and a half tenths off pole. But it was my fault, my own mistake. I was pushing and it was either tip in and go down so I had to go long and that was that,” said Crutchlow.

When asked who he sees as the biggest threats for tomorrows race, Crutchlow obviously pointed at pole sitter Marc Marquez. Marquez’s pole time was an outright circuit record and the first sub two-minute lap on a motorbike around Silverstone.

Crutchlow said he sees Marquez riding differently than usual, saying he looks as if his wheels are in line more and he looks smoother than he usually does.

“When he takes the risks, he still looks wild but over the average lap, he looks a lot smoother than his normal self. Which usually means it’s easy.”

“When Maverick and Valentino push they’ll be there. I think, Maverick may have slightly better pace tomorrow than Vale, but you know on race day Valentino is going to be as fast as anyone on the grid.”