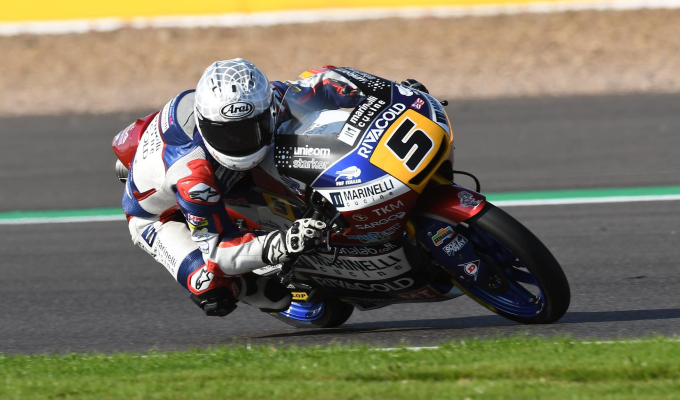 The Italian, who topped this mornings FP3 session, waited until the very end to exit pitlane, including sitting at the end of pitlane to be the last man over the line, wanted to produce a lap all on his own and he executed his plan to perfection.

Fenati’s time of a 2:12.846 was 0.116 seconds ahead of Joan Mir who sat on provisional pole for all of 10 seconds after snatching it from local hero John McPhee. Nico Bulega was the early lead and lead the session from the early stages until the final minute when McPhee took provisional pole, before eventually it fell to Fenati.

Fenati and Mir will be joined on the front row by Gabi Rodrigo who was on the rear wheel of Mir for the final lap and at one point looked as if he could snatch pole for himself. McPhee will head the second row from the lively Antonelli and Andrea Migno. Bo Bendsneyder was the initial leader, only to see his lap cancelled due to exceeding track limits, and he’ll start in eighth ahead of Bugela and Martin.