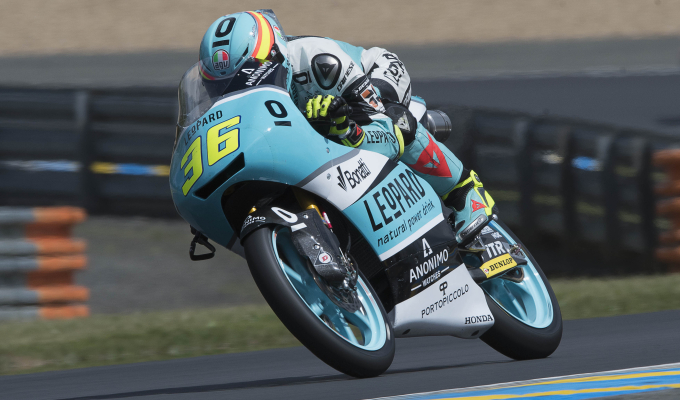 Starting from in eighth position, the Spaniard used early laps to fight through and close in on the leading duo of Jorge Martin and Romano Fenati. When Mir got to third position Jorge Martin highsided out of second position at La Chapel leaving Fenati with two second lead.

Once Mir got some free track he slowly closed in on the race leader and when he was half a second behind the Italian, Fenati made a typical error and tucked the front end of his Honda at Museum, leaving Mir with a 3 second lead.

With a totally free circuit, Mir cruised to his third win of the season, eventually beating out second place man Aron Canet by 4.252 seconds.

Aron Canet got the best of a wild battle for second position backing up his win last time out in Jerez with a second place in Le Mans, finishing just ahead of Italian Fabio Di Giannantonio.

Marcos Ramirez was incredibly unlucky to miss out on the podium once again, but finished top KTM after a thrilling fourth positon just ahead of Juanfran Guevera and Enea Bastianini. Frenchman Jules Danilo produced a strong ride to seventh in front of his home crowd and finished ahead of Andrea Migno, Bo Bendsneyder and wildcard Danny Kent who rounded out the top ten.

Mir’s lead at the top of the World Championship is now extended to 34 points after just five rounds of the 2017 season.