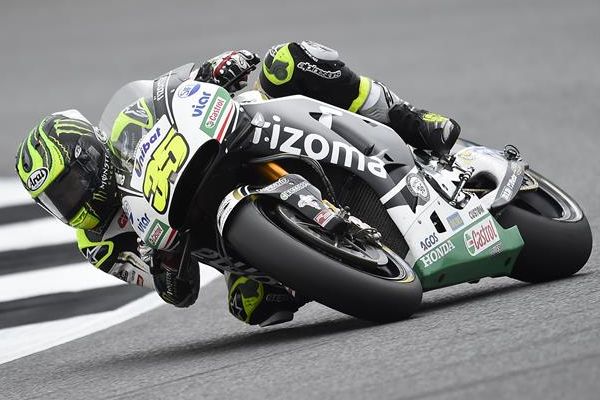 Czech MotoGP race winner Cal Crutchlow was upbeat after the first day of practice at his home Grand Prix at Silverstone.

The Brit arrived at Silverstone on the back of his first ever MotoGP victory, and despite the win coming in mixed conditions, Crutchlow insists he wants a dry race on Sunday. Friday practice was run under heavy cloud, but no rain fell and Crutchlow ended the day third fastest overall, just 0.5 behind fastest man, Andrea Iannone.

Whilst the Ducati rider was 0.3 ahead of second placed Viñales, Crutchlow was relatively pleased with his openings days work, especially when he knows his main priority today was ensuring he was in the top ten and wouldn’t have to navigate the potential banana skin that is a soaking wet Q1 tomorrow.

“It’s not been too bad today. This morning I took it quite easy because we had to try a few different things with the bike,” said the LCR Honda rider.

“I was quite positive at the end of the first free practice, but then I was worried because it looked like it was going to rain all day and I was sitting outside the top ten. Then the afternoon session went well, and I was happy with the steps forward we made.”

Despite ended the day as top Honda, Crutchlow says there is still work to be done with his Honda RC213V ahead of Sunday’s race, especially with question marks over what the weather will do.

“We still have a lot more to do in the next couple of days for the race on Sunday, but we don’t know what the weather is going to do – it’s always a disaster like that. The team is doing a fabulous job and we’ll see how we get on tomorrow whatever the weather.”