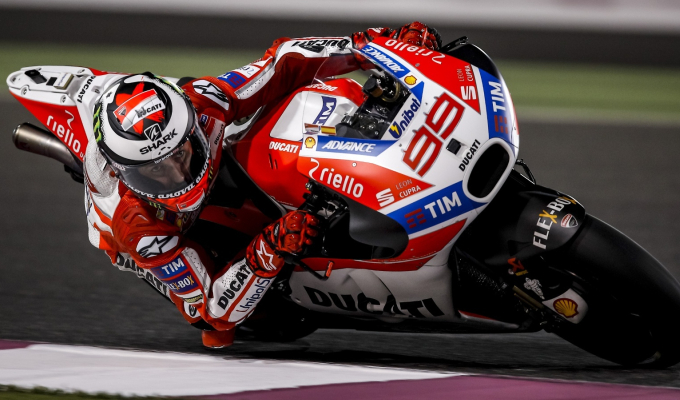 Jorge Lorenzo has said that it’s difficult to draw conclusions from the second night of testing in Qatar as he is one of very few front runners who didn’t use an extra soft tyre for a time trail run in the closing hours of the session.

The Spaniard was buoyed after the first night of testing at the Losail International Circuit which saw him finish fifth fastest overall. Despite finishing the second night in eighth, Lorenzo said that it was difficult to draw conclusions from the second evening due to his lack of a timed run.

“It’s not very easy to draw conclusions from today, also because I was one of the few riders who did not use the soft tyre, with which I could have probably made a significant improvement on my time,” explained the five-time World Champion.

Whilst he said it was hard to judge his evenings work, Lorenzo did say that he is happy with with the fact he improved his lap time from yesterday and happy with the fact that he and Ducati are taking small steps forward every day.

“At any rate one of the positive things from this session is that we have improved on yesterday’s time by three-tenths of a second,” he said.

“Regarding the settings, today we didn’t try anything significant, but we still have some things planned which we will test tomorrow.

“In general I’m quite satisfied with the small progress we are making every day and tomorrow we will try and get the best out of the soft tyres to improve our times.”