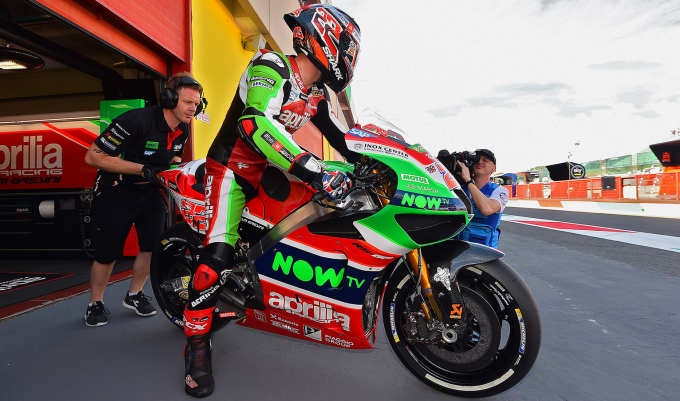 MotoGP rookie Sam Lowes has said that it isn’t farfetched to think that his factory Aprilia team-mate Aleix Espargaro could fight for a podium this weekend in the Czech Republic at Brno.

MotoGP’s summer break ends this weekend with the paddock coming together in Brno to complete the second half of the 2017 and there is hope within Aprilia that the new engine upgrades due this weekend will make the bike much more competitive for the final nine races.

An under powered engine as well as reliability issues when the wick is turned up mean that Aprilia have struggled to make the impact they had hoped in their third season back in MotoGP.

Despite only managing a best finish of sixth in the season opener in Qatar, Lowes believes that his team-mate has the potential to be challenging for a podium on his RS-GP this weekend.

“We’re optimistic for the next race in Brno, where we will have some engine upgrades,” the Brit told Italian website GPone.com.

“Thanks to the constant improvements and the progression made to the frame, it’s difficult – but not farfetched – to think that Aleix could fight for the podium on a few tracks like Brno or Phillip Island, for example.”

With regards to his own future, there has been plenty of speculation that Aprilia would look for a way to end Lowes’ two-year contract a year early. But the 26-year-old insists that he is happy and will be with Aprilia once again next season.

“I have a contract with the team and with Aprilia for 2018 as well and I am very happy, because in MotoGP you need time to adapt and improve, so staying on the same team is important to show your potential. Next year it will be easier for me, because I’ll know what to expect,” he said.

Lowes also revealed that he has had some offers from the World Superbike paddock where he rode prior to joining the Moto2 class winning the World Supersport series, but remained defiant and said that his situation isn’t as bad as many like to think.

“I’ve had some offers,” said Lowes. “There were rumours that we were leaving MotoGP, but I have a two-year contract and I want to see it out.

“I’m a rookie and I was faster than last season’s Aprilia riders. My situation is not as bad as some would try to depict it and I am improving every day.”