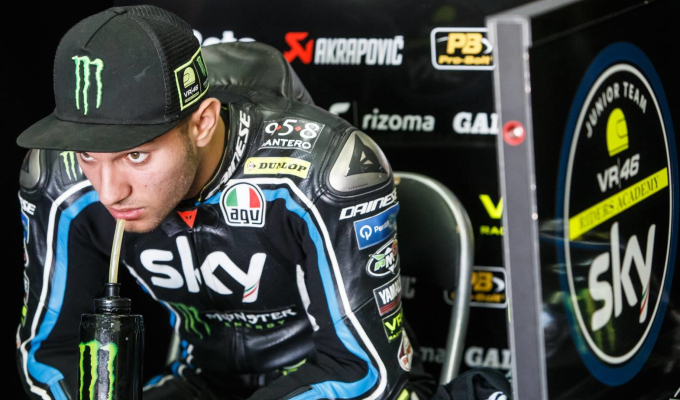 If you’re unfamiliar with the name Dennis Foggia, you should start to learn about the young Italian.

The 16-year-old is currently 50 points clear in the CEV Junior Moto3 World Championship after winning last time out in Estoril. With victory, Foggia looks set to claim the CEV title and move into the World Championship following in the footsteps of Maverick Viñales, Alex Rins and Nico Bulega.

Foggia currently rides for the VR46 Junior team as part of the extended VR46 umbrella for 2017 and being so comfortably in the lead in the CEV series, Foggia has admitted that he has thought about the idea of following the exact same path into the VR46 Moto3 World Championship team, but said that nothing has been discussed yet.

“Seeing Bulega’s path looks like I could follow it and I have to admit that I sometimes think of it, but we haven’t talked about it yet. I have to think about this championship first,” the Roman told Italian website GPone.com.

2017 is Foggia first season in CEV after spending 2016 as part of the CIV series, the Italian series is seen as one of the best feeder series in the world, but the CEV series is a whole different level, something Foggia acknowledges.

“Moving from CIV to CEV last year was difficult, the level is much higher. It’s an environment that looks very much like that of the World Championship,” he said. “Some of the same teams and the bikes are like, and the set up is very professional. Although I do think that the World Championship will be another step up.”

As well as being in the Sky VR46 team, Foggia is part of the now famed VR Riders Academy. Despite being from Rome, he travels to the Adriatic coast to train at Rossi’s ranch on a regular basis. Despite being just 16-years-old, Foggia has said that Rossi is extremely friendly and approachable as are all of the riders in the academy.

“In a sense Valentino is a hero but he is also a friend. He’s always available, as is Uccio and all the others. The workouts that aren’t classic because we have a lot of fun. The days go by fast,” said Foggia.

With the Misano Grand Prix in early September, there has been rumours that Foggia could wildcard in the Grand Prix and get his first taste of World Championship action before a full-time move, much like Bulega did in 2015.

“It would be okay,” he said, “but we haven’t even spoken about this.”