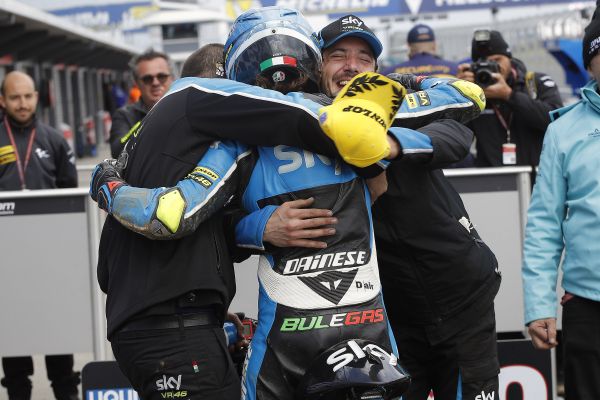 Current Moto3 rookie of the season front runner Nico Bulega is aiming to pip Pecco Bagnaia and Jorge Navarro to third position in the Moto3 World Championship finale at Valencia this weekend.

The Italian arrives in Valencia fifth overall in the World Championship, just fourteen points behind fourth placed Jorge Navarro and a further two behind Bagnaia. 12 months ago, Bulega secured the CEV Moto3 Championship at the same circuit, and he is hoping to make his memories of the circuit even better this weekend.

“Honestly I was not expecting a year like this at the beginning of the season,” Bulega told GPxtra.

“My goal was the top 15 and now – with 2 races left in the season – I’m fighting for the title of Rookie of the Year and I’m in fifth position in the Championship, really close to third. Overall it has been a good season, with two podiums and a lot of important results.

“It’ll be a real fight until the last corner in Valencia, then from there I hope to achieve important result in 2017.”

Regardless of where Bulega finishes this season, it will be considered a stunning rookie year by the 16-year-old. In just his fourth race Bulega produced a stunning ride to earn himself a memorable second place, setting the platform for one of the better rookie seasons we’ve seen from a big name coming into the World Championship.

When asked about the podium in Southern Spain, he said: “First off, I have to say that Jerez is one of my favourite tracks. I was fast since the FP1, I achieved the pole position on Saturday and then the podium. I knew that the main issue for me were the new tracks that I did not know. But also in Jerez was not easy score the second place.”

Whilst many Grand Prix riders came into the paddock on the back of impressive Championship winning campaigns in CEV, there have also been riders who have failed to deliver on their potential. Bulega beleives that his consistency and preparation away from the track has been one of the most important things in his ability to transfer speed from CEV into Moto3.

“The CEV is a great school for the Championship, but the pressure is a lot lower,” he said. “I didn’t change anything in particular; just followed my training schedule at home, being always focused on my goals and leave behind all the negative things and the things without importance.”

With Stefano Manzi joining Bagnaia in the newly expanded Moto2 VR46 Sky team, there had been some talk that Bulega could make the jump after just one season. As well as demonstrating lightning quick speed, size has become an issue for Bulega. However, those rumours were put to rest when he was confirmed as remaining with the Sky Moto3 team for 2017, even if he did admit he was too tall for the Moto3 machine.

“You are right, I am too tall for Moto3, but thanks to KTM and the team, we worked to find the most suitable position for me on the bike. I have a two years contract with SKY VR46: next year I will be in Moto3 and then we will see what happen.

“At the moment my goal is to keep concentrated in Moto3 and try to achieve the most from this season.”