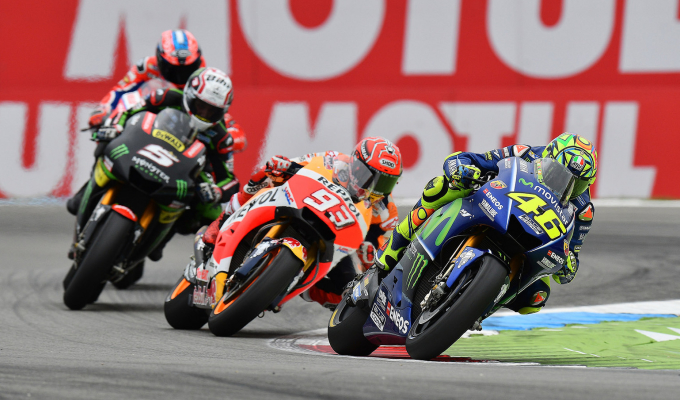 MotoGP World Champion Marc Marquez has had a jab a nine-times World Champion Valentino Rossi by saying that experience alone doesn’t win World Championships and that his younger team-mate has “more speed” than the Italian does.

Marquez and Rossi have a long and well documented history and despite the pair of them looking as if they had put their differences aside, the Spaniard couldn’t resist a dig at his rival. Marquez won his second race of the 2017 season last time out in Germany, and in doing so took the lead of the MotoGP World Championship.

Despite Viñales being his closest challenger, just five points behind him, the Spanish duo have yet to have a head to head dual this season. Sitting a further five point behind his team-mate Rossi is fourth in the World Championship, just behind his compatriot Andrea Dovizioso.

One edge Rossi has over the two Spaniard’s is experience. Rossi was winning his first World Championship in 1997 when Marc Marquez and Maverick Viñales were four and two respectively. Despite having this, Marquez insists that more is needed to become world champion than just experience.

“Rossi has experience, but speed is also necessary. You cannot win a World Championship on experience alone, you need speed too. Valentino has speed, but in this aspect, Maverick is superior,” the World Champion told Motorsport.com.

With four riders all within ten points, the MotoGP World Championship is wide open heading into the second half of the season and Marquez has said that this year is unpredictable and could be anybodies.

“At the beginning of the year no one expected Dovizioso to be there. But on a circuit like the Sachsenring, where he was supposed to suffer, he stayed very close to the Yamaha riders.”

2 thoughts on “Marquez: Viñales has more speed than Rossi”