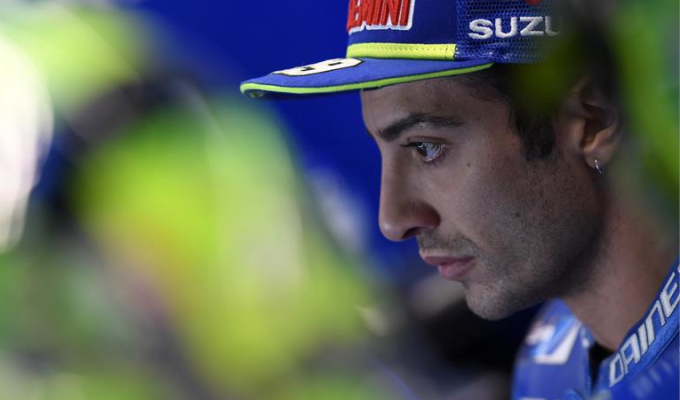 Andrea Iannone has attempted to quash rumours he isn’t giving his all this season on board with the Suzuki, insisting his conscience is clear and that he is giving 110%.

The Italian is enduring a tough season since moving to the Ecstar factory Suzuki team to replace Maverick Viñales, unable to come close to replicating the results of the Spaniard on the GSX-RR thus far.

Iannone’s best result of the season came back in Austin with a seventh position finish and he is currently languishing down in 16th in the riders World Championship. Arguably the low point in the season for Iannone was in Barcelona where he was caught by his temporary team-mate Sylvain Guintolli before finding over a second a lap when he realised the position he found himself.

This prompted rumours that Iannone had given up on the Suzuki and rumours of a move to Aprilia because to accelerate. Despite the talk that he was looking to end his stint with the Japanese factory early, ‘the Maniac’ insists he is happy with how his season is currently going.

“I’m happy [with my results] because regardless of being tenth or on the podium, I give 110%,” Iannone told Italian newspaper Gazetta Dello Sport.

“I’ve been through this before with Ducati, and the results will come. All challenges have pros and cons, there is always risk involved.”

Iannone said that he met with Suzuki bosses in Germany and confirmed that he would be staying with the team in 2018 and he also revealed thinks Suzuki may well have their own satellite team next season.

“We met at Sachsenring and made it clear that I want to continue. We have to believe in us,” he said. “We’ve repeatedly told the President that we need four bikes on the grid, and I think it’s going to happen.”

Suzuki and more specifically Iannone’s struggles have brought the whole team under increased scrutiny with Suzuki legend and 1993 World Champion Kevin Schwantz slamming Iannone’s attitude and questioning his motivation. The Italian said he would’ve preferred the American to tell him to his face, but admits he isn’t bothered by the critics.

“He never mentioned certain things to me, I would have preferred to address the issue face-to-face but it doesn’t affect me. I know what is going on, but there there has been a lot of confusion because everyone expected something different,” he said.