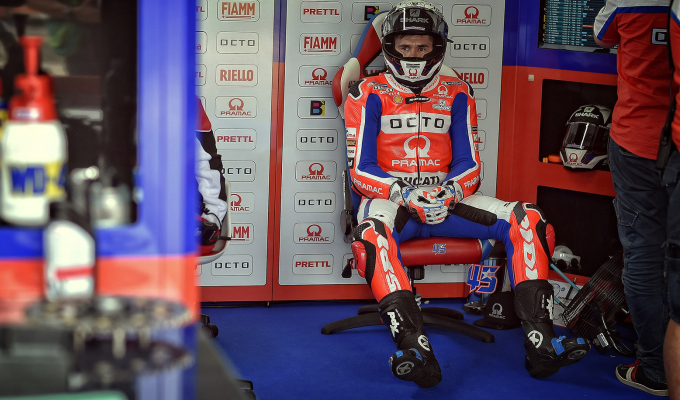 Could Scott Redding be heading to World Superbikes in 2018 or stay in MotoGP next season?

Redding enjoyed a good start to the 2017 season with strong outings in pre-season testing and seventh and eighth place finishes in Qatar and Argentina respectively. Unfortunately for the Brit, he has failed to crack the top ten since which is why Pramac and Ducati have looked elsewhere for next season.

The satellite Ducati team look set to announce Australian Jack Miller alongside Danilo Petrucci for 2018 with an announcement expected possibly after this weekend’s Suzuka eight-hours but by Brno at the latest, leaving Redding in search of a new ride.

Redding has been linked with two rides predominantly in MotoGP, either replacing Sam Lowes at Aprilia, or heading back to partner Franco Morbidelli at the Marc VDS Honda team.

Despite being in a two-year and seemingly very tight contract with Lowes, Aprilia have been very active in sounding out the rider market for a potential change. Cal Crutchlow, Andrea Iannone and Danilo Petrucci have all been approached, but all knocked back with those three due to stay with their respective teams.

With regards to going back to Honda, Redding’s first stint with the Marc VDS team in MotoGP didn’t work out as both parties had hoped, but with Marc VDS Team Manager Michael Bartholemy also Redding’s personal manager the ties will remain strong.

Bartholemy told German website speedweek.com that he anticipates it being very hard for both Redding and Lowes to remain in MotoGP next season: “For Sam Lowes and Scott Redding it will be difficult to find a place in the MotoGP paddock in 2018.”

If the MotoGP window is closed for now for Redding, where else he could look? A return to Moto2 would be seen as too much of a step back, but there are World Superbike opportunities open to the 24-year-old. Being comfortably over six foot, World Superbikes may seem like the more natural fit for Redding despite growing up in the less-traditional for Brit’s Grand Prix paddock.

The move to partner Xavi Fores in the Barni team is a little more difficult to execute. Whilst Redding is currently a Ducati rider, the factory Ducati WSBK team has Chaz Davies tied up for next season and Marco Melandri is expected to resign shortly. There is also the issue of money. The privateer team would need a serious cash injection to be able to afford Redding next season. If the factory could support a move with an eye to potentially replacing Chaz Davies should the Welshman move back to MotoGP in 2019, a move could make a lot more sense.

Ducati are also bringing a new V4 engine for 2019, meaning after one season of adjustment to the Superbikes and the new paddock, Redding could be the man chosen to try and taken down Kawasaki with the new Ducati.

The picture will become much clearer when the paddock ends its summer break and reconvenes in Brno next weekend, not least if Miller’s move is confirmed by then.