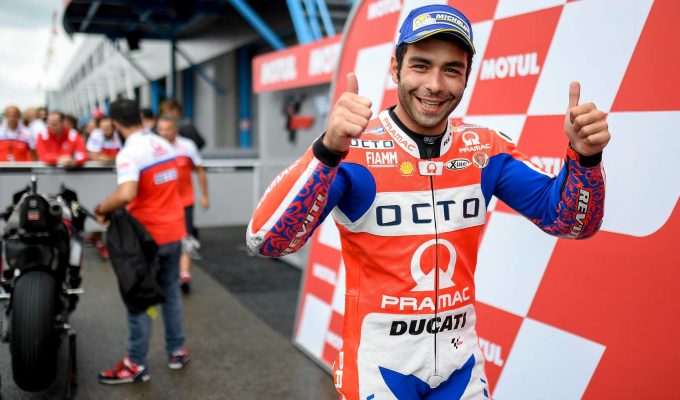 Danilo Petrucci is currently enjoying the best season of his MotoGP career. The Italian is sat in eighth position and has already claimed two podiums this season and is setting his sights on bigger things in 2019.

The 26-year-old has knocked back Aprilia’s advances regarding a factory ride in 2018 in favour of another season at Ducati, aiming for a ride on the “real” Factory Ducati in 2019 when all factory contracts will expire.

“For 2019 all the bikes will become free and I’m not closing any doors,” Petrux told Italian website GPone.com after a two-day test in Misano.

“My main goal that year is to still be riding the red bike… but the ‘real’ one, in the factory team. I know Ducati cares about me, if I do well I might be able to enter the factory team… otherwise I’ll change jobs (laughing).”

Turning down Aprilia wasn’t an easy thing for Petrucci. The Noale factory made the Italian an extremely competitive offer, but Petrucci said being part of the “project” at Ducati was too good to walk away from.

“I like to do things properly, and it wasn’t the right time. Ducati is doing a great job and I feel as if I’m part of the project, this test proves that. I believe I’m important to them and I wouldn’t have wanted to walk out now,” he said. “If I’d chosen another path, I think that the second part of the season would turn out differently.”

As well as wanting to be a part of Ducati, the idea of signing a two-year contract and being out of sync is another reason Petrucci didn’t want to walk away from the satellite Ducati team.

“I repeat, I like to do things properly and so personally it makes more sense to go with a two-year contract, to have greater continuity,” said Petrucci.

With regards to the two-day test, the Italian was given a new fairing as promised by Gigi Dall’Igna, but he wasn’t able to reveal much other than the amount of laps he’s done and praising the work done by the Ducati engineers.

“I can say that I’ve seen that the engineers haven’t held back, giving me so much material to test,” he said. Also noting that the amount of time spent on the bike has served as good training.

“Spending so much time on the bike served as useful training, on the first day I completed 90 laps, the second 77,” said Petrucci.