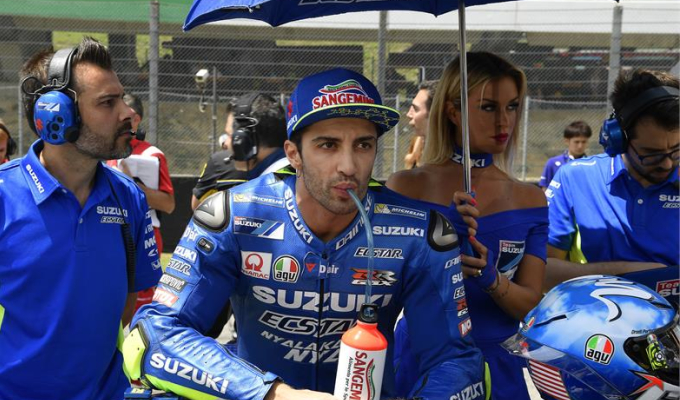 Once the MotoGP paddock gets into the meat of the season, it’s silly season begins. Whilst last year saw it begin from the first round of the season, all factory riders are currently in the first year of two year deals, thus meaning speculation is a little quieter this year, although it hasn’t stopped the rumour mill being fired up.

The biggest name in this year’s rumours is that of Andrea Iannone. Overlooked by the Ducati factory as the man to partner Jorge Lorenzo for the next two years, ‘The Manaic’ was selected as the man to replace the Yamaha bound Maverick Viñales in the Suzuki factory. However, it hasn’t worked yet for the Italian just yet, and he is currently sat in fifteenth in the World Championship on just 21 points.

With Iannone not enjoying his time with Suzuki, he has supposedly been looking for a way out. Rumours circulating around the paddock in Barcelona were that Iannone wanted to join Italian factory Aprilia. With Aleix Espargaro impressing and Sam Lowes taking his time to adapt to life in MotoGP, the Italian media have been pushing for a change, pressing to get the Italian to replace the Brit.

Despite Iannone’s best wishes, his manager, Carlo Pernat told German website speedweek.com that Iannone’s contract with Suzuki was “watertight”, which should have ended any speculation right there, but it hasn’t.

Despite Pernat’s comments, a move for Iannone still makes rumours. Along with Iannone, Aprilia are thought to be exploring other options should they wish to move on from Lowes after just one season, with former rider Alvaro Bautista also linked with a return – although he would likely turn down a chance to return to the Noale factory in favour of staying with the Aspar Ducati team on a GP17 next season. If not Aprilia, where else could Iannone go should he get out of his Suzuki contract? Well, according to Spanish newspaper Marca, a return to Pramac could be an option. With Petrucci – another rumoured Aprilia target – happy at Ducati as part of the satellite team but on a factory bike, Pramac may be looked to freshen things up in the other side of the garage. Iannone was on a package similar to what Petrucci is currently on when Dovizioso and Crutchlow were in the factory team. Whether Iannone would get that kind of package again remains up in the air.

Another rider being linked with the second Pramac Ducati seat is that of Jack Miller. The Australian’s three year HRC contract is up at the end of the season and Miller is keeping his options open. Despite the link, Italian website GPone.com say that Miller’s wage demands are too high for Pramac and subsequently that ends that speculation.

Miller’s future with Honda remains up in the air with at least one of the current Moto2 World Championship leader Franco Morbidelli and front runner Alex Marquez moving into MotoGP in 2018. Current Moto3 World Championship leader Joan Mir’s move to Marc VDS for Moto2 was confirmed in Barcelona, meaning it’s certain at least one will heading up. Whilst Marquez looks as if he may give Moto2 another crack in 2018, saying it “80% certain” he stays in Moto2 next year in Barcelona, Morbidelli definitely appears as if he will be a MotoGP rider next season.

With Tito Rabat being offered a ride back in Moto2 as part of the Marc VDS outfit but also talking to the Avintia Ducati team, it looks as if there will be on free seat in the Marc VDS MotoGP team and should Marquez decide to stay in Moto2, it looks as if Marc VDS may be choosing between a current and former rider with the seat looking as if it will be between Scott Redding and Jack Miller.

Lucio Cecchinello and his LCR Honda outfit are eager to recruit a second rider alongside Crutchlow. Taka Nakagami has been offered the seat if he meets certain requirements and HRC may be flexible with those requirements should they wish to get a Japanese rider in MotoGP. If Morbidelli decides he doesn’t want to stay with Marc VDS and chooses to leave Honda, then Iannone’s seat at Suzuki could be of interest to him. The Italian is close with team manager Davide Brivio through their links with Valentino Rossi and it could offer Suzuki a fresh start with two young riders if they’re happy to move on from Iannone. Whether Morbidelli likes the Suzuki ride remains up in the air, but the lure of a factory contract could be enough for Moribdelli much like it was for Alex Rins last season.

Speedweek are also reporting that Morbidelli’s representatives have also held conversations with Pramac Ducati, as have Sam Lowes’. Although Lowes camp insist that he has a two year contract and isn’t going anywhere.

With the factory riders signed up, if they’re unable to get any moves they want, it would be satellite riders who are the big movers after this season. With both Tech3 riders and Crutchlow at LCR signed up for next year, the Marc VDS seats remain the biggest question mark.