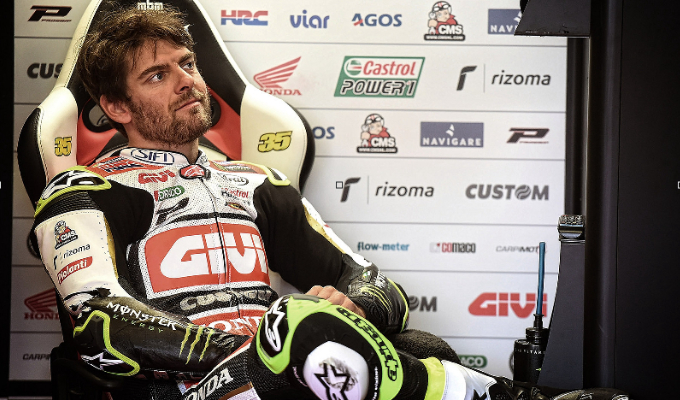 Cal Crutchlow has signed a new two year deal with Honda to remain part of the LCR Honda team, ending speculation he could leave the French satellite outfit at the end of this season.

The Brit’s contract fell out of sequence with a lot of the other top riders with the all twelve of the current factory riders all currently in the first year of two year deals with their factories, and it appears it will continue that way with the latest two year deal.

It is being reported by Marca that the contract Crutchlow has agreed to is a direct one with the Japanese factory rather than one with LCR Honda themselves, meaning Crutchlow will now only be receiving factory support, but will be employed directly by them.

It is understood the 31-year-old finalised the deal this past weekend in Barcelona where finished in eleventh place. Official confirmation of the deal is expected to be made ahead of the next race which takes place at Assen in just under a fortnight’s time.

Crutchlow has worked closely with the factory in previous years, often being asked to test new parts or give a final judgement on an upgrade after the factory duo of Marc Marquez and Dani Pedrosa have had a say. It is now apparent than Honda value Crutchlow highly enough to offer a straight contract to the Brit.

Whether Crutchlow remains the only rider in the LCR Honda team for next season remains up in the air with multiple different riders linked with a possible second seat. Jack Miller is in the final year of his three-year Honda contract as part of the Marc VDS team, although Honda are keen to keep hold of Miller, meaning he could partner Crutchlow much like he did in 2015.

Marc VDS Moto2 rider Franco Morbidelli has also been linked with LCR boss Lucio Cecchinello vocal in his admiration of the Italian, whilst Taka Nakagami has also had an incentivised offer from Honda of a MotoGP seat next season should he finish in the top three of the Moto2 World Championship.

Crutchlow remained in Barcelona after Sunday’s race where he continued to test new parts for the factory, with some of the new fairings painted in Repsol colours with his 35 fitted to the front.