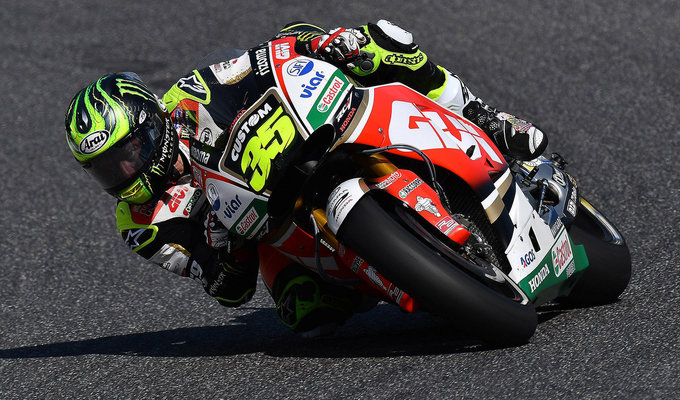 Cal Crutchlow gave Honda something to smile about on a difficult first day, topping the second free practice session and the first day in Italy.

The Brit on his satellite machine was hanging around the bottom of the top ten for most of the session, before a flying lap late on propelled him to the top of the timing sheets with a 1:47.365 which was the fastest lap time of the day.

It was also gave Honda an opportunity to smile with reigning World Champion Marc Marquez ended both sessions in ninth and fourteenth and Dani Pedrosa thirteenth and fifth respectively. Whilst Marquez was focusing on longer runs on his RC213V, it will cause Honda slight concerns to see both riders struggling.

Andrea Dovizioso backed up his strong start to the weekend in FP1 by ending the second session of the weekend in second position. Leading for the majority of the session, the Italian will be buoyed by his early pace and will be hoping to carry this through the weekend.

Much like Dovi, Jonas Folger continued on from where he left off in FP1 and he was third fastest overall. The young German was less than two tenths behind Cruchlow and with his new contract in his pocket, he will be hoping to be fighting with his team-mate, Johann Zarco, who finished just behind him in fourth position in FP2.

Dani Pedrosa was fifth fastest and just ahead of a five Ducati’s in the next six with Alvaro Bautista (sixth), Hector Barbera (seventh) sandwiching Andrea Iannone and his Suzuki (eighth) with Michelle Pirro (ninth), Danilo Petrucci (tenth) and Jorge Lorenzo (eleventh) just behind the GSX-RR.

Despite still being in very obvious pain, Valentino Rossi moved up to twelfth overall. Rossi was seen taking his chest protector out at one point as he continues to battle his chest injury. Maverick Viñales was thirteenth after missing a large portion of the session having to get his arm strapped and checked following a very fast a scary crash at Arabbiata 2 early in the session.