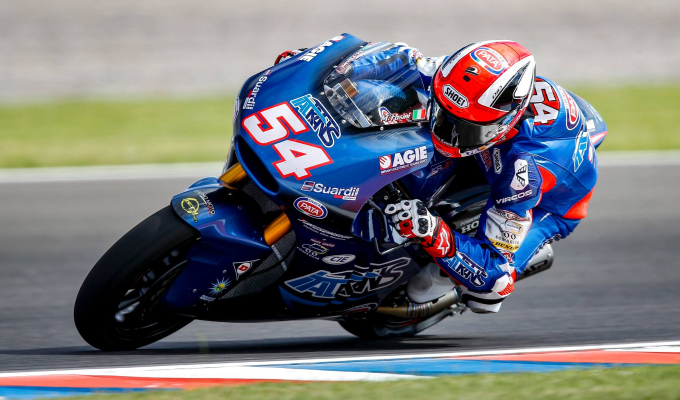 The Italian hasn’t stood on the top step of a Grand Prix podium since winning at Misano in 2009, pipping Swiss rider Tom Lüthi to victory by 0.052 seconds.

Starting on the outside of the front row, Pasini remained in a front group with Lüthi and the Marc VDS duo of Alex Marquez and World Championship leader Franco Morbidelli. With the front four remaining close until the closing stages, the race apperared it was always going to come down to the final few laps where the decisive moves would take place.

Pasini had lead in the early stages, before settling in with Lüthi and Marquez ahead of him. With three laps to go, Morbidelli couldn’t quite hang with the front three. Going into the final lap Marquez along with was  the Swiss rider and Pasini all in with a chance of the victory.

Lüthi took the lead at San Donato whilst Pasini took second place off Marquez at Savelli down the hill in the run up to Arrabbiata 1, where Pasini moved past Lüthi. Pasini rode defensively for the second half of the lap and would hold to the win.

Behind the front four, Miguel Olivera finished in a lonely fifth position whilst Luca Marini was sixth and just ahead of Domi Aegerter. Simeone Corsi was eighth with Jorge Navarro and the returning Brad Binder rounding out the top ten.