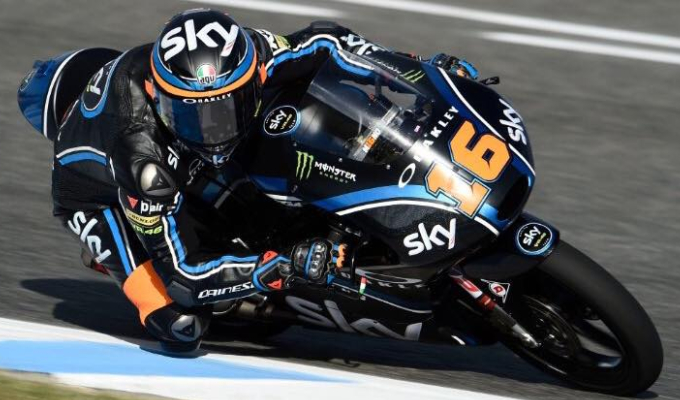 The young Italian sporting a special liveried Sky VR46 KTM, riding the perfect race to get his victory. Starting on the outside of the fourth row, Migno battled towards the front of the group at the midway point in the race, before falling back to the middle of the exceedingly large group.

However, with three laps left, the 21 year old fought his way to the front and managed to lead over the line going into the final lap. Leading the on the final lap, Migno and compatriot Di Giannantonio broke away ever so slightly, and with ‘Digigi’ following Migno it appeared he was planning on pipping Migno across the line.

Despite seemingly producing the tactical masterclass, entering the final corner in second position, Di Giannantonio couldn’t beat Migno across the line giving Migno his first win in Moto3 in his 46th Grand Prix.

Juanfran Gueverra joined the two Italians on the podium, pipping out the impressive South African Darryn Binder, Aron Canet and John McPhee who all finished less than half a second behind Migno.

Joan Mir further extended his lead in the World Championship finishing seventh just ahead of Ayumu Sasaki, Marcos Ramirez and Nico Bulega who rounded out the top ten. His closest rival before the weekend, Romano Fenati looked as if he was going to be in contention for a podium, however the Italian faded down to finish thirteenth.

Mir’s lead is now 34 points ahead of Aron Canet, whilst Fabio Di Giannantonio has also leapfrogged Fenati into third whilst Fenati is now fourth.