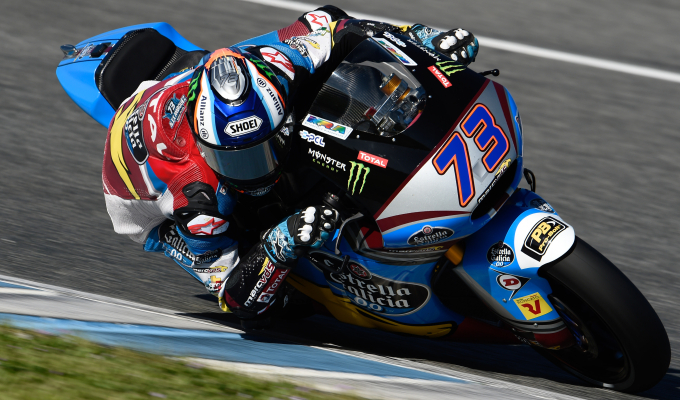 Alex Marquez impressed during the first official Moto2 test of 2017, fending off competition from his team mate Franco Morbidelli and Miguel Oliveira leading the way in Jerez.

The 2014 Moto3 World Champion lead a Marc VDS 1-2 with a lap record pace, posting a fastest lap time of a 1:41.989 which was two tenths of a second faster than the best time of his Italian team mate.

Behind the two Kalex riders was the surprise package of Miguel Oliveira and his KTM. The Portuguese rider rejoined the Ajo Motorsports team for 2017 and the decision appears to be a good one, after topping the first day, he was just a further two tenths from Morbidelli’s best time.

Swiss rider Domi Aegerter was fourth fastest on his Suter, just ahead of the impressive rookie Jorge Navarro who was fifth on his Gresini Kalex.

Forward Racing’s sole representative Luca Marini was eleventh whilst his team mate was forced to sit due to tendinitis in his arm.

Much like the Moto3 teams, the Moto2 riders will now head to Qatar to complete their second and final official test at the Losail International Circuit a week before the season opener.