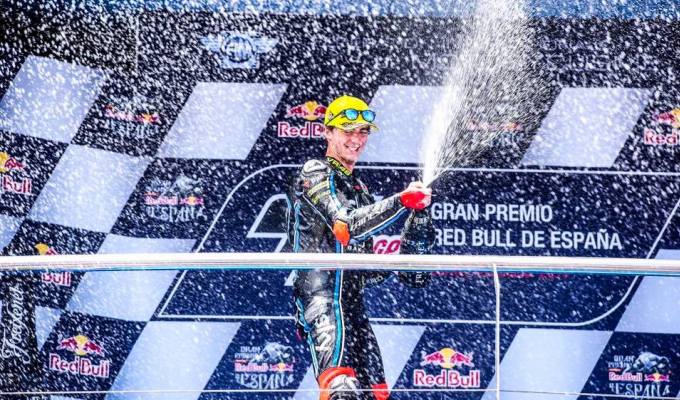 One of the brightest stars outside of the MotoGP paddock is that of Italian Francesco ‘Pecco’ Bagnaia. The twenty year-old had a breakout season last year with the Aspar Mahindra Moto3 team, claiming the first Grand Prix win of his career at Assen.

Pecco rejoined the VR46 team in 2017 but as part of the expanded Moto2 set up. After just four races Bagnaia claimed his first podium in the intermediate class with a remarkable second position at Jerez last time out.

GPxtra caught up with Bagnaia just before the race last weekend to find out how he has been adjusting to life in Moto2.

GPXtra: How are you finding life in Moto2 after last season?

Bagnaia: I’m really satisfied of my choice of jumping from Moto3 to Moto2 with Sky Racing Team VR46. We spend a season together in 2014, then I moved to Aspar Team, where I made a great step forward for my career and now I’m here again for a bigger step to the new category.

Thanks to Aspar Team, VR46 Riders Academy and SKY Racing Team VR46 I was able to improve a lot my performances and I made a great experience.

Now I back in the Team but in a new category: it is an ambitious new project for helping the Italian talents of the two wheels and I’m so proud to be part of it. We work alongside a lot of professionals that they follow us in every stage of our preparation and also during the GPs –  in an familiar atmosphere.

GPX: What is the biggest differences you’ve found?

PB: Compared to Moto3, I have to say the weight and also the power of the bike. In Moto2, you have much more data and you can play a little be more with electronics. Also the tyres are completely different: you have to manage the rear tyre

GPX: Where are you looking to improve the most yourself in the coming races?

PB: I have a lot of different rooms of improvement: first of all, experience. Then breaking points, feeling in the exit of the corners.

GPX: Is it tough to go from being a front runner in Moto3 every week to being in the tough midfield of a Moto2 grid every week?

PB: No at all. The results of the three first races are not bad. All the guys – look at Morbidelli or Balda for example – struggled a bit at the beginning in this category. When I took the decision to move to Moto2 with a completely new Team in the category I knew it would be not easy, but I’m confident, we can be competitive.

GPX: Does it help training at in the academy with people like Morbidelli when you can see what he’s doing every week?

PB: Yes, sure! We have an incredible crew of professionals that take care about us in every stage of our preparation and also during the GPs. I think the most incredible thing in this Team is that the people help you to understand your mistakes.

This is the most important thing if you want to teach something to a young guy. I need to feel that the people working with me are listening to me and this is exactly the spirit of the Sky Racing Team VR46.

I saw the last three races on TV and Morbidelli made something different compared to the other opponents. I have to understand exactly what I have to do to try to reduce the gap – so I need to ride as much I can. Franco made an incredible step forward, but I know the behind the scenes and you can not image his effort, his incredible constance so I’m really happy for him.

GPX: What’s your goal for the season now you’ve had a feeler to what to expect week in, week out?

PB: Rookie of the year is the goal. And from mid season Top10 in every race.