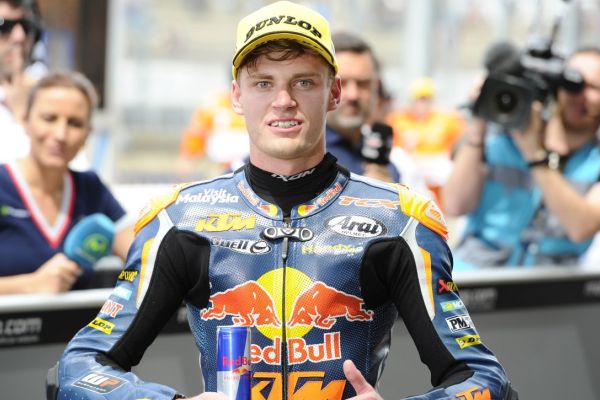 World Championship leader Brad Binder showed why he is the Moto3 title favourite after a masterful victory at the Bugati Circuit in Le Mans.

Romano Fenati had lead the race for large portions of the race, however on the penultimate lap, the South African slid underneath the Italian to take the lead. Binder then controlled the final lap perfectly, not allowing Fenati or third placed Jorge Navarro a sniff of the lead, as he builds on his Jerez victory with his second ever win.

Rookie Aron Canet was close the whole race and was never dropped by the lead duo, however the Spaniard just couldn’t move ahead of his team-mate and was lucky to not clean his team-mate out on the final corner.

Nico Bulega managed to lead the second group of riders in fifth place. After his huge highside during qualifying didn’t prevent the rookie from battling and getting the better of Fabio Quartararo, Andrea Migno and Nico Antonelli.

Jakub Kornfeil had run with the leaders before a mistake into T9 saw him drop down the field, with Andrea Locatelli rounding out the top ten.