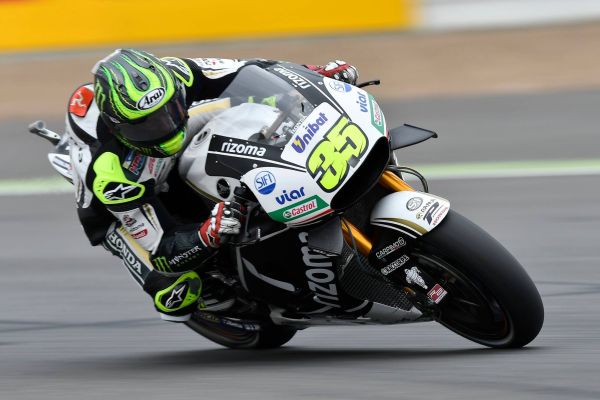 Cal Crutchlow continued his form from Brno to claim a historic pole position, to become the first British rider to do so at his home Grand Prix since Barry Sheene did so in 1977.

The LCR Honda man said that he would’ve preferred it to be dry, however, the 30-year-old took full advantage of the heavy rain, posting a lap time of a 2:19.265 which was, at the time, three seconds faster than the quickest time posted by Jorge Lorenzo.

Times continued to drop through the session, although Crutchlow never looked like being toppled, eventually claiming the pole position by 0.998 seconds ahead of Valentino Rossi. Rossi will fancy his chances in both the wet or the dry tomorrow, and the pair will be joined on the front row, by Rossi’s team-mate for 2017, Maverick Viñales.

Dani Pedrosa heads the fourth row ahead of Marc Marquez who suffered a very similar crash to his one 12 months ago during last years race. Marquez highsided out of the first corner and despite a superb effort to hang on, there was nothing the World Championship leader could do. Fortunately Marquez walked away, but was further reminded of the fragility of his World Championship lead, if he needed reminding.

Eugene Laverty will join the Repsol Honda’s on the second row, despite a crash of his own. Laverty was on one final flying lap where he was actually under Crutchlow’s time at the halfway point. Unfortunately for this Irishman, Laverty crashed out at turn 12 and his qualifying session was over.

World Champion Jorge Lorenzo will start from the outside of the third row, behind Scott Redding and Andrea Iannone, as the World Champions struggles in the rain continue. He will be hoping for a dry race tomorrow more than anyone else.

Andrea Dovizioso heads the fourth row, but had to be helped away after a nasty crash at turn 15 right before the Wellington Straight. Dovizioso was struggling with a knee injury coming into the weekend and his knee appeared to be causing him trouble after the crash. Jack Miller failed to post a lap time after crashing out on his opening lap at turn 17.