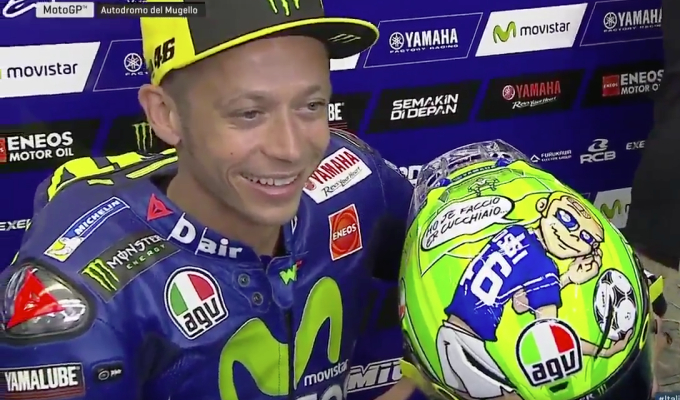 Valentino Rossi has unveiled his special edition 2017 Mugello helmet, as tradition on the Saturday morning in Italy.

This year’s helmet pays tribute to former team-mate Nicky Hayden and with a mix of football in there too. Rossi called this years helmet the 469, with his 46 blended into the 69 of Nicky Hayden, sharing the number six.

On the top of the helmet there is a cartoon of Rossi – plastered, taking a joke at the fact he is currently injured. Rossi is placing the ball down for a penalty in an Italy kit and is paying tribute to former Roma captain Francesco Totti who retired after 26 years with the Italian club.

Rossi is saying “shall I chip”, in reference to a “paneka” penalty, which is also the title of Totti’s book. Then on the back it reads “One captain. There is only one captain” as a tribute to Totti. Heading into Saturday morning’s FP3, the Italian was twelfth fastest overall as he continues to battle the chest injuries sustained last week in a MX crash.