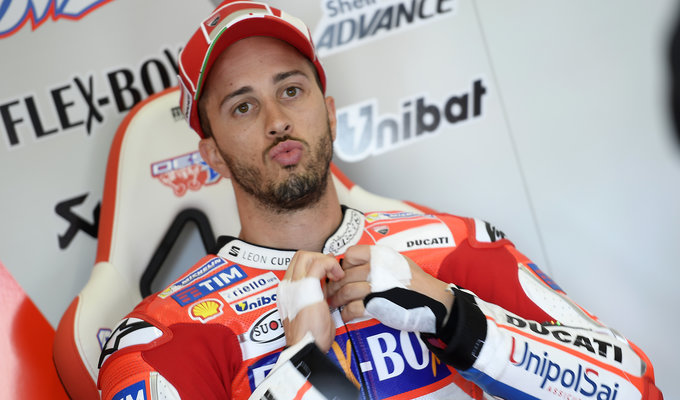 Andrea Dovizioso got his home Grand Prix off to the perfect start this weekend, topping FP1 from Ducati test rider Michele Pirro.

It wasn’t until the tail end of the session that Dovizioso posted his fastest lap, a 1:47.394, but it was good enough to leap frog his compatriot who had spent time at the top of the timing sheets. Both Ducati’s were using the softer compound, meaning longer runs in temperatures close to what Sunday’s race will be held in, will make FP2 maybe more important.

MotoGP World Championship series leader Maverick Viñales was third fastest and completed 18 laps on a single tyre to try and gauge the levels of grip he would have towards the end of Sunday’s race.

Johann Zarco continued his impressive form from Le Mans and he was fourth, just ahead of the Ducati trio of Hector Barbera, Jorge Lorenzo and Danilo Petrucci who were fifth, sixth and seventh respectively. Whilst newly resigned Jonas Folger and Honda duo Marc Marquez and Cal Cruthclow rounded out the top ten.

Second in the World Champion Dani Pedrosa struggled to thirteenth fastest, although the Spaniard has been working himself up through weekends this season.

Home hero Valentino Rossi couldn’t finished any higher than fifteenth as he battled his chest injures, in visible pain at multiple points when pulling into the pits to give feedback to his Movistar Yamaha crew.