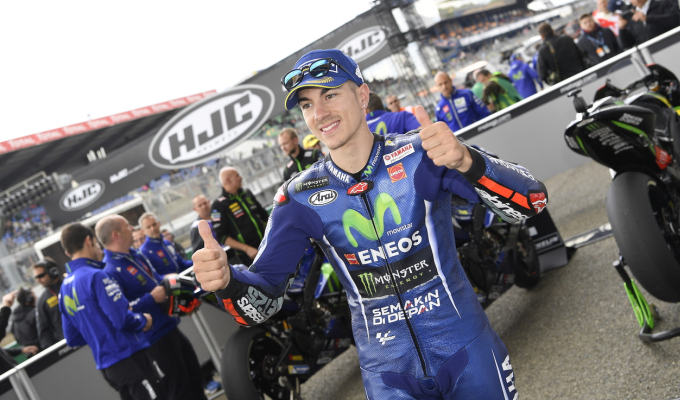 Maverick Viñales has regained the MotoGP World Championship series lead after his team-mate Valentino Rossi crashed out with three corners to go.

Maverick Viñales capitalised on two rare mistakes from Valentino Rossi to claim his third win of the season. The Italian was leading the race halfway around the final lap when he ran wide at Garage Vert, the double apex right hander gifting the lead back to Viñales. Desperate to make up for his mistake, Rossi pushed too hard three corners later and lose the front end of his Yamaha M1 crashing out of the race.

Rossi wasn’t the only championship challenger who crashed out the race, with reigning World Champion Marc Marquez also losing the front end of his motorcycle, although the Spaniard did it on turn 2, with a similar crash to Jack Miller, thankfully avoiding the way unlike the Australian.

Hometown hero Johann Zarco was the early leader of the race and despite Viñales taking the lead off the Frenchman relatively early on, Zarco didn’t lose his head and continued to press the Spaniard, whilst holding off Rossi and Marquez.

Once Marquez crashed, Rossi pushed and eventually squeezed past Zarco with four laps to go and set about his team-mate. Taking the lead off Viñales at the top of the hill with two laps to go, Rossi lead for just over a lap before his mistake on the final lap.

Behind the Yamaha’s Dani Pedrosa produced a heroic ride to claim a podium and take second place in the World Championship despite his fifth row start. With the crashes of Rossi and Marquez, Pedrosa now sits 17 points behind Viñales.

Andrea Dovizioso (4th) and Cal Crutchlow (5th) battled with Pedrosa for the majority of the race and will be a little disappointed to have the podium to themselves after a race long battle with the Spaniard.

Jorge Lorenzo salvaged a sixth position finish despite starting sixteenth and finished ahead of Jonas Folger, Jack Miller, Loris Baz and Andrea Iannone who rounded out the top ten.

Tito Rabat enjoyed an eleventh place finish and was just ahead of the KTM duo of Pol Espargaro (12th) and Bradley Smith (13th) with the Austrian factory making significant progress this weekend. Sam Lowes claimed his first MotoGP World Championship points with fourteenth and wildcard Sylvain Guintoli was the last of the finishers in fifteenth.

It was a day to forget for the satellite Ducati riders with Scott Redding, Danilo Petrucci, Alvaro Baustia and Karel Abraham all failing to finish along with Aleix Espargaro.