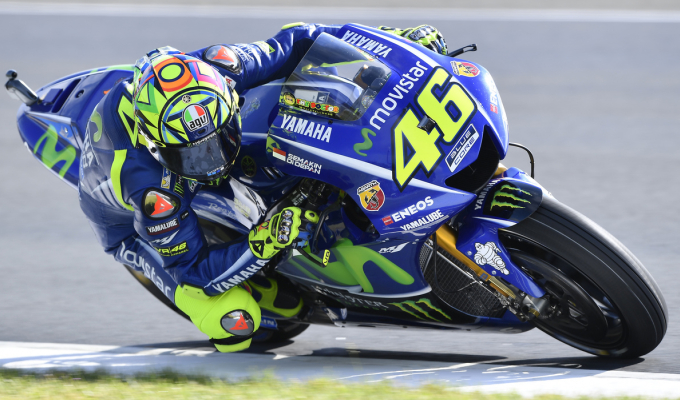 Valentino Rossi insisted on looking at the positives from this past weekend in Le Mans despite crashing out of the race on the final lap, throwing away 20 World Championship points in the process.

The Italian enjoyed his strongest weekend of the season, qualifying in the middle of the front row and leading the race before a mistake on the final lap. Rossi ran wide at the bottom of the hill at garage vert, allowing his team-mate, Maverick Viñales, to retake the lead, before crashing out of the race three corners later and three corners from the end of the race.

Despite crashing out of the race and as a result, losing the lead of the World Championship to Viñales in the process, Rossi insists he is happy with the progress made and the pace over the weekend.

“It was a great shame, because for my team it was the best weekend of the season, where I was more competitive on the track, also in the wet, but especially in the race,” said the nine-times World Champion.

“For sure, for me this could have been the best result of the season.

“It was very difficult because the pace was always very high, but at the end I felt comfortable on the bike, I had a good feeling, so I tried to attack. Unfortunately, on the last lap I made a mistake in turn six (garage vert) and I fell back a little, so Maverick could overtake me. I knew I had another chance, because we were very close and I tried to remain there, because in sector four I was good.”

Rossi said he was surprised with the crash as you usually have to focus on the front of the bike going into turn nine, but instead he lost the rear end of his M1, forcing him to slide out.

“Sincerely, what happened during the crash, we don’t understand. Usually you have to pay attention to the front, but I lost the rear when I crashed. Anyway, I made a mistake, and it’s like this.

“It is a great shame to go back home with zero points. First of all, I’m very sorry for missing out on the probable victory and also for losing the lead in the championship, because I lost points. For me, it still has been a good weekend, I was strong.”

“Now we have to start thinking about the next race track, I hope to ride there like I did this weekend. We hope to continue like this.”