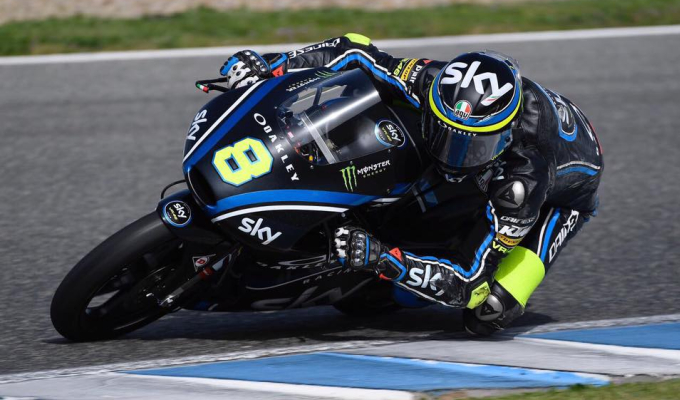 Days after topping a private test in Valencia, Nico Bulega posted the fastest time of the opening day of Moto3 testing in Jerez, ahead of Phillip Öttl and Jorge Martin.

The Italian continues prove himself as the man to beat in 2017 as he tops the early stages of pre-season testing. The VR46 Sky rider’s best lap time was a 1:46.912, which was 0.109 seconds ahead of the German’s quickest time. Jorge Martin was the only Gresini rider on hand and a further tenth behind Öttl in third position.

The returning Romano Fenati was three tenths behind his compatriot on his Ongetta Honda and he was just ahead of British team rider John McPhee, Joan Mir, Andrea Migno, Aron Canet, Livio Loi and Tatsuki Suzuki who rounded out the top ten 0.9 seconds behind Bulega’s time.

The test will continue tomorrow with the riders continuing to share track time with the Moto2 riders.