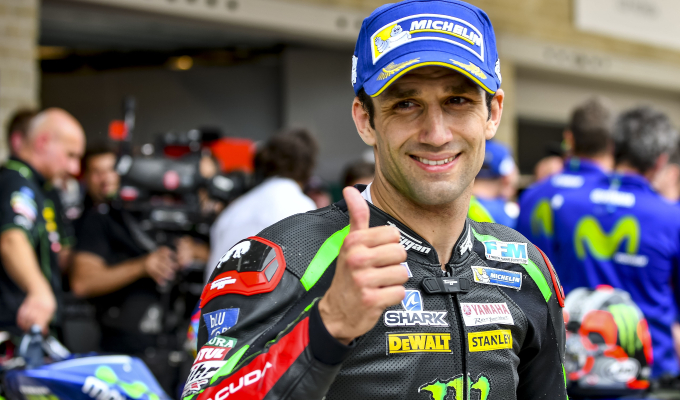 Frenchman Johann Zarco has had his Tech3 Monster Yamaha contract renewed for a second season after his stellar start to the 2017 season.

The two-time Moto2 World Champion fell into the lap of the Tech3 team after Suzuki elected to go with the younger Alex Rins over the Frenchman and with the French team couldn’t be happier with the way their season has gone.

Despite crashing out of the lead in the opening race of the season in Qatar, a pair of fifths in Argentina and Texas before a fourth place in Jerez leaves Zarco in sixth in the World Championship, exceeding all expectations from the satellite Yamaha team.

Zarco was understandably delighted to get his contract extended with the Tech3 team and said he hopes he can regularly challenge for podiums for the rest of this and next year.

“I am very happy to know that I will continue my MotoGP experience with Monster Yamaha Tech3 in 2018,” said Zarco who will turn 27 in July.

“At the moment, I am enjoying an amazing debut in this category where I have learnt a huge amount, and the team have now given me the confidence for next year, which is just fantastic. I want to say thank you to my manager Laurent Fellon who has helped me at all times and also, thanks to the people who have assisted me since I started racing in the World Championship.

“We can see that Tech3 is a great team because when we push, it’s possible to get a strong result. I am very happy but this is only the beginning and I will keep learning and growing so that I can regularly fight for podiums, and then once I am at this level, I plan to continue in this way for as long as possible.

“In 2018, the rules won’t change and I will have an entire year of experience so this will certainly help me to get to the top.”

Team manager Herve Poncharal was delighted to have finally landed and kept a quick French rider on his Tech3 machine.

“This news is incredibly good for me and the entire Monster Yamaha Tech3 team but it is also positive for MotoGP racing worldwide and especially in France,” said Poncharal.

“We can announce that Johann Zarco has decided to remain with us for the 2018 season. Perhaps he could have waited a bit longer to make this decision, but he told me that he is happy and ready to commit himself to us. We are very proud to have that sort of confidence from Johann.

“He has already brought some amazing things to the team, such as huge excitement and joy, but he has also given us some pride back. I’m sure the best is yet to come, yet what he has done in the first four rounds is really impressive.

“I would like to thank Johann’s manager Laurent Fellon for his superb commitment and if Johann is performing in this way, it’s because Laurent took good care of him and helped him to grow into the rider that he is. We are more than happy to keep ZF with us, Z for Zarco and F for Fellon, and now we can fight in the remainder of the 2017 season with a high spirit.

“In addition, we can go out and try to find the partners who will be on our side in 2018. I would like to thank Johann and Laurent so let’s hope that this news will help him to be as strong as the whole crowd is expecting him to be for his home GP here in Le Mans.”