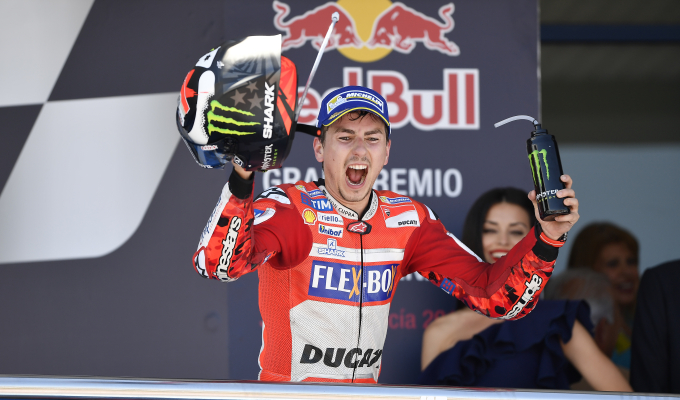 Factory Ducati’s Jorge Lorenzo has said that the Desmosedici is finally starting to feel like his own after his first podium with the Italian factory in Jerez.

The Spaniard shocked a number of people by finishing on the podium last time out in Jerez, a circuit he has previously excelled at, but that Ducati historically struggle on. As well as getting his first podium as part of Ducati, it also provided Lorenzo with the confidence required to compete at the front on a more consistent basis.

With tests at Jerez and Mugello since the end of the Jerez race, Lorenzo and Ducati have been working hard to find the improvements required to help him challenge every weekend.

This weekend Lorenzo will be hoping that he can continue in the same vein and have a strong weekend at a circuit he has previously gone well at. Lorenzo has won more races at Le Mans than any other circuit, including five of the last seven.

“Following the good sensations we had at Jerez, we are now at Le Mans which is another circuit where I have good memories because I have managed to win a number of times and in different categories,” said the 30-year-old.

“I have to say however that every circuit has its own story, and here we’ll have to see how my Desmosedici goes with the new tarmac. The most important thing however is to maintain the positive spirit that helped us to get onto the podium at Jerez.”

The Bugatti circuit has recently been resurfaced which should help the Ducati riders with their grip and the stop start nature of the circuit could play into the hands Desmosedici, especially with Lorenzo starting to feel more at home with the bike.

“I am optimistic for this race, because from Austin onward there has been considerable improvement, especially in terms of sensations, and I’m starting to feel the Desmosedici increasingly like it’s mine.”