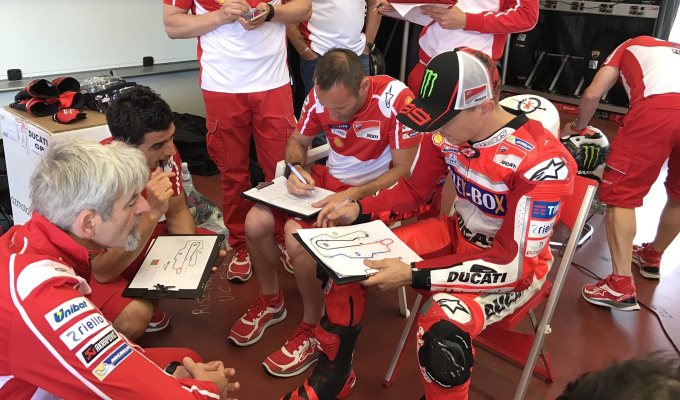 The factory Ducati team have completed a one day private test at Mugello ahead of this weekends French Grand Prix at Le Mans.

The factory duo of Jorge Lorenzo and Andrea Dovizioso were joined on track by test rider Michele Pirro as they aim to further improve the Ducati Desmosedici GP17 into a bike capable of challenging at the front every race weekend.

The Ducati trio had the Tuscan circuit to themselves all of Monday, however rain from Sunday night meant that there was a lack of usable track time in the morning, until the sun tried the track out, leaving all afternoon to get miles under their belts. Despite being forced to sit all morning, Lorenzo managed to completed 63 laps whilst Dovizioso did 70 before calling it a day.

Whilst no official word as to what Ducati were testing, Italian website GPone.com report that they weren’t doing any testing on a new fairing and were instead given permission to test the stiffer carcass 2016 Michelin front tyre after last weeks post race test in Jerez. They report that Lorenzo was firmly against the older tyre, whilst Dovizioso was ambivalent about the tyre, not having too much of a preference either way.

Ducati didn’t release any times from the test, but deemed the test a success and will now head north as they prepare for this weekends French Grand Prix at Le Mans.