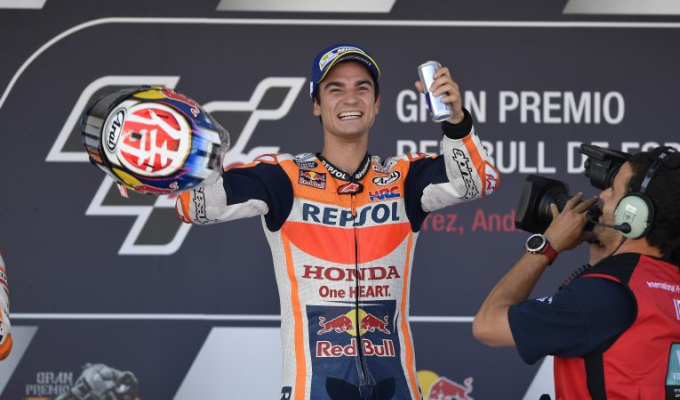 Jerez MotoGP race winner Dani Pedrosa arrives in Le Mans in a positive mood as he bids to strengthen his title challenge this weekend.

The Spaniard fired himself into title contention with a stunning win in Jerez last time out. His win in front of his home fans, paired with the struggles of the Movistar Yamaha duo leaves Pedrosa just ten points off the lead of the MotoGP World Championship as the paddock head into the meat of the season in Europe.

With such a dominating weekend in Jerez, the 31-year-old arrives in Le Mans in what he described ‘a very positive mood’ as he looks to claim his first victory on French soil since 2013.

“After a great weekend in Jerez we now head to Le Mans in a very positive mood,” said Pedrosa. “The French GP is always challenging.”

Astutely aware of the changeable conditions in Le Mans, Pedrosa points to the lack of certainty with the weather as one of the aspects that makes the French Grand Prix one of the toughest on the calendar. With the weather this weekend looking as unpredictable as ever, Pedrosa is ready for the challenge ahead.

“To begin with the weather is usually quite changeable which makes it difficult to find rhythm in the practice sessions or to plan how to improve run by run as it may be too cold or the total opposite, very hot,” he said.

“The track itself is very short and the smallest differences in the lap times can make a great difference in the standings. I hope the bike works well on the new asphalt. You need good acceleration and good braking, but consistency is the real key.

“We are working well with the team and we’ll try to maintain the same level also there.”