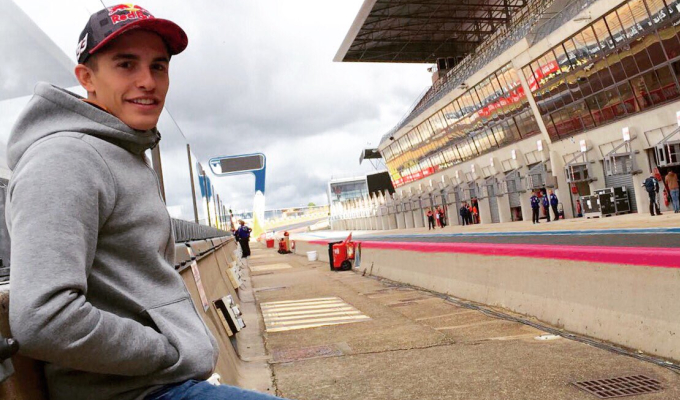 The Repsol Honda team left today’s one-day test in Le Mans without completing a single lap due to rain in France.

Today’s one-day test at Le Mans was organised by Michelin as they look to develop their tyres as well as gain data at the French circuit which has recently been resurfaced ahead of the French Grand Prix in a little under three weeks time.

Both MotoGP World Champion Marc Marquez and his team-mate Dani Pedrosa were in France for the test today, with a good opportunity for teams to experiment and try new things as well as aiding Michelin meant HRC also brought LCR’s Cal Crutchlow to the test.

Unfortunately, overnight rain and cold temperatures throughout today meant that neither of the Repsol Honda riders completed a lap on their RC213V’s – although they did complete a post lunch lap in a car. All was not lost for Honda as Crutchlow did get some laps under his belt although nowhere near as many as Honda would’ve liked.

The reason that neither rider completed any laps was to save their testing days for later in the year. Both riders have five testing days in their pockets for 2017 and when track conditions were good enough to run on, HRC bosses deemed it not worth wasting one of their remaining five days on. Both riders are now due on track in Monday’s post Jerez test after this weekend’s Grand Prix.

Despite neither of the Repsol Honda riders completing any laps today, the majority of the other factories did get some valuable laps under their belts ahead of this months French Grand Prix. The top two in the World Championship, the Movistar Yamaha pair of Valentino Rossi and Maverick Viñales were testing alongside Aprilia’s Aleix Espargaro and Sam Lowes and KTM’s Pol Espargaro and Bradley Smith. They were also joined by KTM test rider Mika Kallio who was testing a new engine in the KTM.

Neither Ducati nor Suzuki had their factory riders on hand to test in Le Mans, although Ducati did send test rider Michele Pirro to gain some data for them.